Superstar actor Salman Khan’s iconic character Chulbul Pandey is making an exciting return in a brand-new avatar with Dabangg - The Animated Series on Disney+ Hotstar VIP. An adaptation and reimagination of the blockbuster Bollywood franchise, the action-comedy series chronicles the day-to-day life of Police Officer Chulbul Pandey, who stands in the face of evil to keep the city safe. He is joined by his younger brother Makkhi, who, new to the police force, attempts to emulate his older brother in every sticky situation. It is a rib-tickling entertainer that can be enjoyed by kids and all fans of the franchise. So, get set to be Dabangg and welcome the most loved police officer back in an all-new animated version. 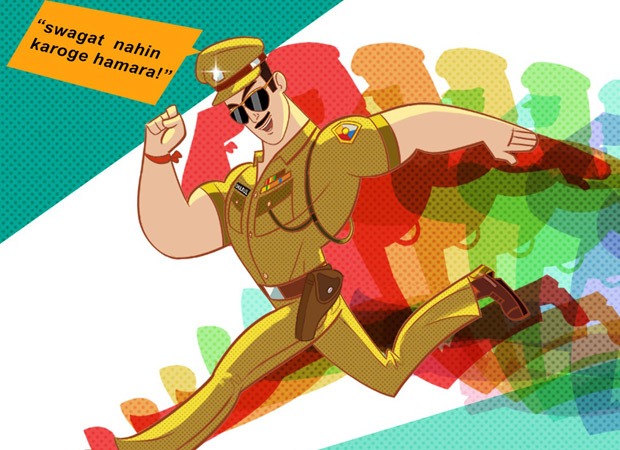 The first 8 episodes of Season 1 are Now Streaming exclusively in Hindi, Tamil, and Telugu on Disney+ Hotstar VIP, with new episodes set to be released regularly. Produced by Cosmos-Maya and Arbaaz Khan Productions, Dabangg - The Animated Series marks the latest addition in an extensive collection of kids’ content that ranges from all-time favorites like Toy Story, Doraemon, Mickey Mouse Clubhouse, and Sound of Music to contemporary superhits including Selfie With Bajrangi, Chacha Chaudhary and Sofia the First. To ensure a safe, entertaining, and controlled experience, parents can navigate through the platform’s unique kids-safe mode to access age-appropriate content.

Speaking about Chulbul Pandey’s return in an animated avatar, actor Salman Khan said, “Chulbul Pandey is a very special character for me because of the love that audiences have showered on him, and the movie, for over 10 years. I couldn’t be happier that Chulbul, Makkhi, and Rajjo are returning in animated avatars to entertain the children of our country. I cannot wait to binge-watch all episodes of Dabangg - The Animated Series with my nieces and nephews while at home. Animation has opened up yet another dimension for this character and I'm thrilled Cosmos-Maya did that. I hope that all children, along with their families, take time out and enjoy watching this together.”

Producer Arbaaz Khan said, “Dabangg, for me, goes beyond just a film or a franchise; and to see it coming to life in an all-new format is overwhelming and we were on board with the idea, the moment we met Team Cosmos-Maya. They have revolutionized Indian animation & I couldn't have asked for a better animation studio partner for our Dabangg. The thought behind creating Chulbul Pandey was to make him a household favorite, and the biggest and most humbling compliment comes from all the love that this character has received from children. Kids are the toughest crowd and critics because they speak from their heart and getting a thumbs up on Dabangg - The Animated Series from them would be one of my greatest achievements. I’m happy to have collaborated with Disney+ Hotstar VIP to bring kids and their parents all episodes of this fun and entertaining series that they can watch at their convenience, from the safety of their homes.”

Disney+ Hotstar spokesperson said, “Dabangg is an exceptional addition to the library of kids content on Disney+ Hotstar VIP, which offers parents the crucial control of managing what their children are watching, through the kids-safe mode. Audiences of all ages love Salman Khan, and we’re delighted to be bringing his iconic character and movie in a form that can be enjoyed by kids and their families. Time spent indoors can be made entertaining with this latest series along with engaging offerings like the new season of the popular show, Selfie With Bajrangi, successful Disney titles and much more. We have had a wonderful collaboration with Cosmos-Maya and are happy to further build this with a Blockbuster Bollywood franchise reimagined in a creative yet entertaining manner.”

Anish Mehta, CEO of Cosmos-Maya said “Dabangg is a landmark IP launch for us at Cosmos-Maya as we mark our 10th year of original Indian IP creation. We are privileged to have such an iconic franchise that fits in the Cosmos-Maya formula of 'familiarity with novelty'. We couldn't have asked for a bigger & better character for our 20th show, than my personal favourite, the cult icon Chulbul Pandey who has been immortalized by Salman Khan, while working beside Arbaaz Khan and a fabulous platform partner like Disney+ Hotstar VIP."

ALSO READ: Salim Khan says Salman Khan’s Radhe is not a great film; feels the industry does not have good writers