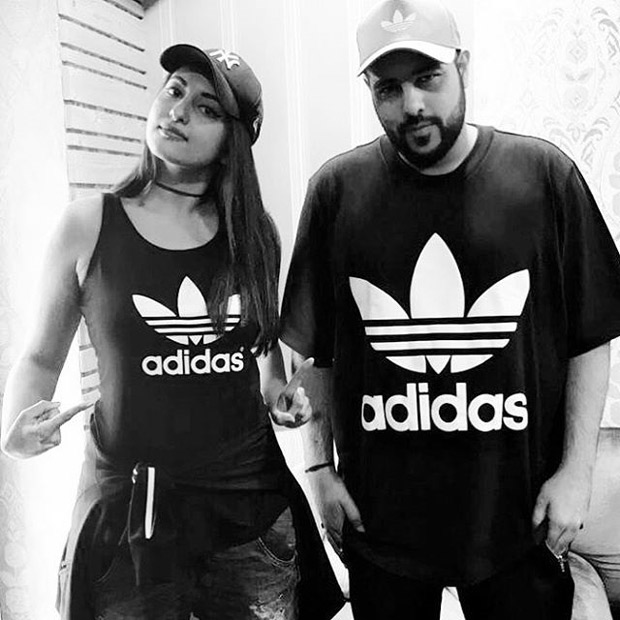 Armed with two back to back action packed thrillers in the form of Akira and Force 2, last year turned out to be a memorable one for Sonakshi Sinha. Even whilst she had been shooting for the films, Sonakshi Sinha had already started shooting for Noor, which is supposed to be the adaptation of the Pakistani Novel, ‘Karachi, You’re Killing Me’. Recently, Sonakshi Sinha took to the social media and stated that they have now wrapped up the shooting of Noor.

This time round, Sonakshi Sinha posted her photograph with the well-known rapper Baadshah, in a recording studio, whereby they recorded a song for the film. She captioned the photograph as “Twinning and winning at the recording studio! #waitforit #recordingoutfitonpoint @badboyshah”. While the details of the song are not yet out, one does have to confess that Sonakshi Sinha looks dapper as ever in the adjoining photograph.

Besides Sonakshi Sinha, who plays a journalist in Noor, the film also stars Purab Kohli and Kanan Gill. While Noor is being produced by Bhushan Kumar and Vikram Malhotra, the film is being directed by Sunhil Sippy. Besides Noor, Sonakshi Sinha will also be seen in Ittefaq opposite the hunky Sidharth Malhotra. For the uninitiated, Ittefaq happens to be a remake of the late Yash Chopra’s 1969 film by the same name.

When Kareena Kapoor revealed her family’s…