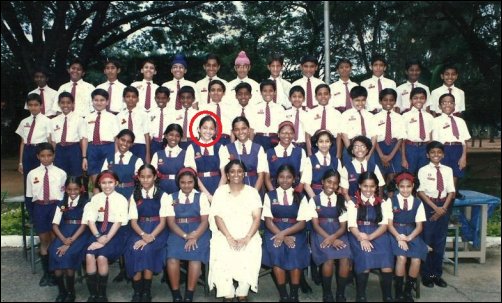 Till a few years ago, she was one of the front runners in the modelling industry... till the time... time stood still for her! Little did she know that she was the answer to not just someone's prayers, but also a nationwide massive search for the heroine of his mega project which had the Prince Of Hearts himself playing the lead!

If you are one of those who have guessed it right, then full marks to you, but for all those who are still wondering who she is, then, here's the answer. She is the one who is circled, and who is all the time circled by topmost directors and producers alike... just waiting for her to sign the dotted line. She is none other than Anushka Sharma, the girl who became an overnight sensation with her debut film Rab Ne Bana Di Jodi. We chanced upon her childhood picture on the web and decided to share it with you!

Though from a school girl to one of the country's biggest actress, Anushka has come a long way, her million dollar smile still remains the same.