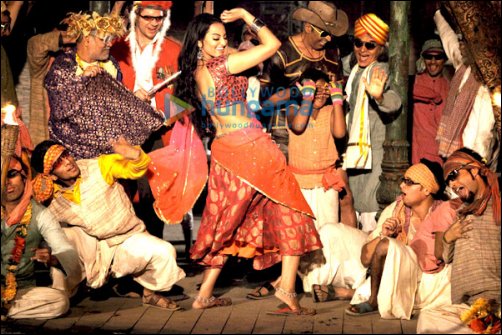 While Munnis, Sheilas, Razias and Shalus are making waves for all the right reason, it can be rest assured that one won't be seeing the last of the item numbers this season. That's because the latest to hit the dance floor with vengeance is none other than Sonakshi Sinha who would be coming up with some enticing moves of her own in a special song and dance sequence 'Dance Karle English Mein' for Joker. Though it is not a quintessential item song like the aforementioned ones, it is bound to present Sonakshi in a new light altogether, especially after a rather silent call that she took in Dabangg.

"'Dance Karle English Mein' is pretty much a part of the film but comes with its own fun flavour. Sonakshi gets into a full-on 'jhatak-matak' mode for this song which is set in a village. Though it is not raunchy by any means, it has in it to reach out to the masses in a big way", informs a senior unit member.

There is a story behind the placement of this song in the film. Contrary to misconception amongst a few, Sonakshi is not playing a village belle in the film. In fact she and Akshay Kumar return from abroad to their village and adopt 'desi' mannerisms to mix up with the folks there. This is what leads to a situation where the number crops up.

"For Shirish too it was a new setting altogether as his Jaan-E-Mann had an out and out Western classy look where his songs like 'Humko Maaloom Hain' and 'Sau Dard Hai' had an opera look and feel to them. However for Joker, he too is letting his hair down", the source continues.

When contacted, the director did acknowledge that 'Dance Karle English Mein' is a special song but refrained from calling it as an item number or being even remotely similar to the genre followed by 'Munni' or 'Sheila'.

"Let's look at every song in its own individuality", says Shirish, "This is a special song in the film as it has lyrics in ten languages. We had a ball shooting for it. Also, Sonakshi was a revelation. From being someone coy in Dabangg, it was a welcome change for her too to show a different side of her persona."

Well, if this picture is any indication, Sonakshi surely seems to have a lot up her sleeves!