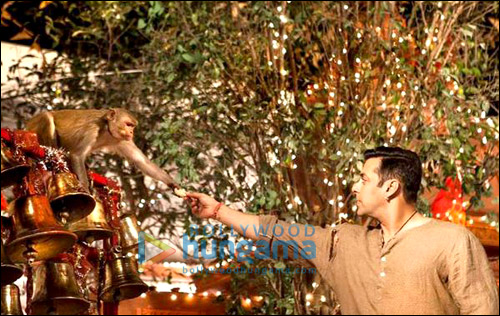 Salman Khan is known to be a generous man and this time around, the actor was extending a supportive hand towards an animal on the sets of Bajrangi Bhaijaan.


Bajrangi Bhaijaan which is currently being shot in New Delhi will see Salman Khan in a traditional avatar and a picture of the actor taken on the sets of the same has gone viral on the web. In the picture, Salman Khan is seen sporting a simple kurta and shooting in what seems like a temple, where the actor is feeding a monkey, sitting on top of a mountain of bells at the shrine. However, it is yet to be known if the captured picture is a part of the film or yet another kind gesture of the actor off screen.


Along with his hosting stint in the eighth season of Bigg Boss, Salman Khan is simultaneously shooting for Bajrangi Bhaijaan and also for Sooraj Barjatya's Prem Ratan Dhan Payo starring Sonam Kapoor, Swara Bhaskar among others. Bajrangi Bhaijaan will also star Kareena Kapoor Khan and Nawazuddin Siddiqui in prominent roles and is directed by Kabir Khan and produced by Salman Khan and Sunil Lulla.