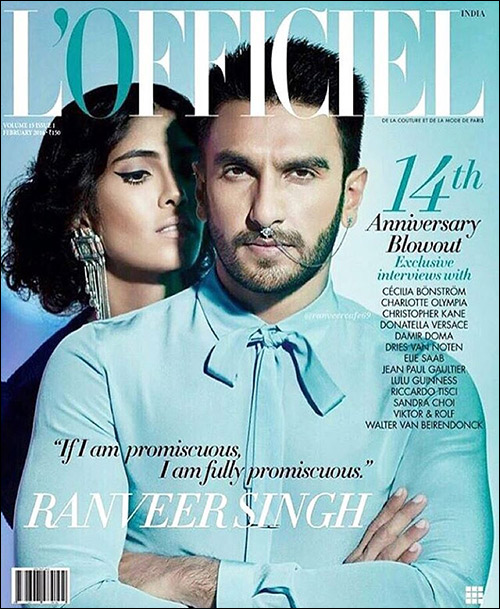 Known for his unique sense of style, Ranveer Singh has left the fashion critics surprised and even shocked at times with his collection of outfits. While during Bajirao Mastani we spotted the Ranveer wearing dhoti pants for promotions and other public appearances, the actor went a step ahead for the cover of L'Officiel this month.


Ranveer Singh was spotted in a blue formal shirt with a pussy bow from Gucci's Men Cruise 2016 collection as well as a nose ring from Amrapali. The actor pushed the envelope when it comes to the 'gender-bender' fashion and is one of the rarest stars of Bollywood to have experimented with this look. On the Bollywood front, Ranveer is on a roll with him bagging almost every award in the Best Actor category this year for his performance in Bajirao Mastani. In a candid interview with the magazine post his celebratory moment at the Filmfare Awards, Ranveer reveals details about his upcoming film with mentor Aditya Chopra, Befikre, his love for Bollywood and a lot more.


This 14th anniversary issue of L'Officiel also boasts of interviews with several prominent personalities from the world of fashion and glamour like Donatella Versace, Christopher Kane, Elie Saab, Jean Paul Gaultier, Viktor & Rolf among others.