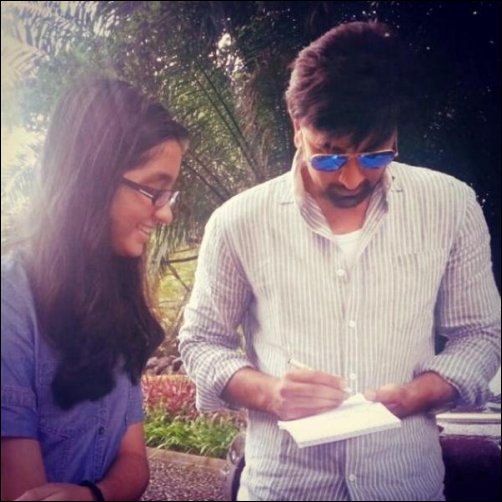 Though his last release Besharam tanked at the box office, Ranbir Kapoor still remains the biggest heart throb of the young generation. Currently, the actor is busy working on his next venture with Jacqueline Fernandez and Arjun Rampal titled Roy. He was snapped on sets of the film in Malaysia.

In fact Ranbir Kapoor took some time off while on sets to meet a few fans, and obliged by signing autographs for them. Seen sporting a striped shirt and mirrored shades with a goatee, Ranbir Kapoor looks super cool in his new avatar. As for the film itself, Ranbir will be seen playing the role of a thief while the story is based on a love triangle between him and Arjun Rampal fighting for Jacqueline Fernandez.

Produced by Bhushan Kumar, Krishan Kumar & Divya Khosla Kumar, and directed by Vikramjit Singh, Roy is slated for release in February next year.