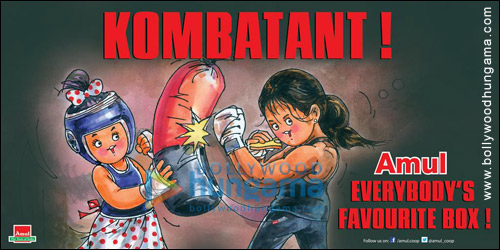 The recently released sports biopic Mary Kom based on the life of India's pugilist Mary Kom, starring Priyanka Chopra, has been well-received by both the audiences and critics. While the film continues its march at the box-office, the web has been flooded with messages congratulating makers for such a touching film.

Cashing in on this is Amul's latest campaign featuring caricatural depictions of Priyanka's character from the film. With a tag line that reads, 'Kombatant! Amul everybody's favourite box!', the creative pays tribute to Priyanka Chopra and Mary Kom.