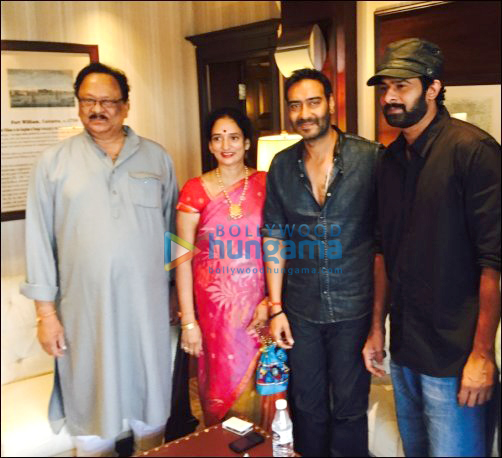 Prabhas has certainly achieved huge fame and stardom in Bollywood, courtesy Bahubali's stupendous success. While he went on to meet Prime Minister of India, Narendra Modi, recently, the actor even seems to have had yet another 'fan moment' of sorts when he was in Delhi.

It seems that Ajay Devgn who is busy with the promotions of Drishyam, was recently in the capital for his film and the actor was staying in the same hotel as Prabhas and his family was. Prabhas who is a fan of our 'Bollywood Singham' decided to take some time out to meet the superstar and even introduced his family to him. They even clicked pictures with the superstar and from what we hear, the two actors really bonded well over movies.

Bahubali, directed by SS Rajamouli and produced by AA Films, Arka Media Works in association with Dharma Productions, also stars Anushka Shetty, Tamanaah, Rana Daggubati, Ramya Krishnan in prominent roles. A second installment of the film is all set to release next year. On the other hand, Drishyam is a remake of a Malayalam blockbuster by the same name and is directed by Nishikant Kamat. Produced by Viacom Films and Panorama Studios, the film is slated to release on July 31, 2015.