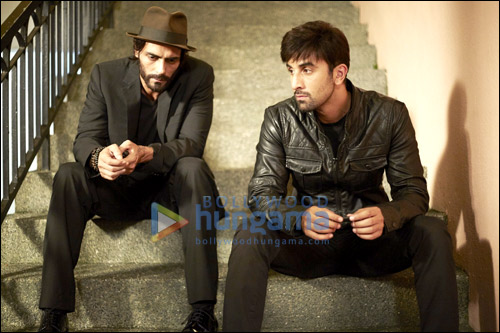 Roy has been creating curiosity since its inception and obvious is the reason considering Arjun Rampal and Ranbir Kapoor are coming together along with Jacqueline Fernandez playing a double role, for the first time.


And now it has been revealed that Arjun Rampal will be seen in the role of a director in the film. We have learned that Arjun will be essaying the role of Kabir Grewal who will be directing none other than superstar Ranbir Kapoor in the film. Jacqueline Fernandez, as mentioned before will be seen in a double role and will be romancing both Arjun and Ranbir. We bring to you the first look of the film where the leads Arjun Rampal and Ranbir Kapoor are spotted in an all black avatar for the film. Prior to this, we had even given a glimpse of Jacqueline's look in the film.


As far as the plot is concerned, we hear that Ranbir Kapoor whose name in the film is 'Roy', is actually a thief who has pulled off some impossible heists. From dodging bullets to chasing cars he has done it all and yet has escaped from law with ease. There is a certain kind of mystery behind Ranbir playing hero in Kabir Grewala aka Arjun's films in Roy. On the other, Arjun as the director will be seen directing two films which are based on 'Roy', the thief's life. However, as the movie progress, the real connection between the two unfolds as audience realize that there is more to what meets the eye