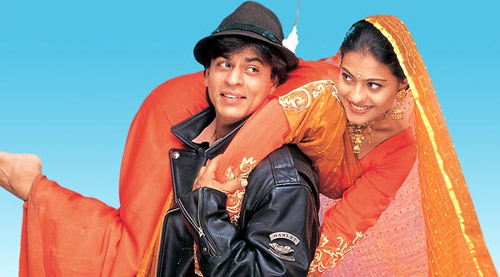 Mandir cinema. Celebrations are planned on a big scale and obviously the film completes a generation of life in the theatre - in which people born around the day it released (October

20, 1995) must have now attained majority and reached the age of being able to vote and drive! Sadly, its producer (Yash Chopra) is not around to bask in his son's - writer-director

Aditya Chopra had decided to make an action drama, Auzaar, to mark his debut, but later decided on a romance between an Indian girl and an American boy. He was keen to

sign Tom Cruise, but Yash Chopra, despite liking his concept, did not want a foreigner as a hero.

But all this happened only after Aditya gave the subject to Yash Chopra himself to direct, but the father was not impressed at first. During the narration, however, Aditya began

to visualize key sequences from the film and finally decided to write and helm it, for he had been too lazy to pen the script for three years!

Also the tried-and-repeatedly-tested formula of a new lead pair was considered but rightly abandoned because of the histrionic demands of the script, and in one his rare early

interviews, Aditya had stated that he "wanted to make a film that could be watched again and again, and would also do good business".

So Saif Ali Khan, who had worked with senior Chopra in Parampara and with the banner in Yeh Dillagi, was first offered the role, but declined it for mysterious reasons.

Shah Rukh Khan was the anti-hero of Chopra's Darr and was not keen on becoming a typical lover-boy from Hindi cinema, but decided to do the film. Kajol agreed only because

Aditya was "a good friend" and she had worked with SRK in Baazigar and was doing Karan Arjun with him.

Kirron Kher was not in the cast of the film, but when her husband

Anupam Kher narrated the story and said that the Chopras were looking for the right title for the movie, suggested Dilwale Dulhania Le Jayenge, a phrase from the chartbusting

'Title suggested by Kirron Kher' credit was mentioned in the opening titles of the film.

Interestingly, a small film of this name was also made and certified in 1980 - and had been directed by noted writer Rajinder Singh 'Aatish' with Desh Gautam and Beena Shyam in the

leads and an obscure composer - Cuckoo Singh! The clear C-grader has long gone into oblivion along with everyone involved with it!

There was also a lot of dispute over the climax of the film, and cinematographer Manmohan Singh has gone on record to say that while father and son Chopra as well as he had all

agreed that the end was clichÃ©d (there were also elements of similarity also to the last scene of Jab Jab Phool Khile), Aditya stubbornly insisted on it. Today, DDLJ's climax

has seen many covert and overt copies and tributes, and the film itself has been an open inspiration for Humpty Sharma Ki Dulhania, which was a success in 2014 itself.

For the first time in Indian cinema, NRIs were given importance enough to play pivotal roles - both the hero and heroine were normal resident Indians who met and fell in love by

chance abroad. As a film veteran observed, "This was the first time that NRIs looked, spoke and behaved like the real Indian youth in USA and wore normal outfits rather than

"costumes" given to lead actors in Hindi cinema. This was the root of the high identification the NRIs have with this film."

The script also clearly showed that these people were as Indian, if not more rooted at the core, as those who lived within the motherland. So while Indian lovers often eloped, the hero

here put family first and wanted to marry her after he won over the father of the bride.

As Aditya put it in almost 14 years ago, "It was Sooraj R. Barjatya's

Hum Aapke Hain Koun!... that gave me the courage to depict lovers who never eloped - which is something very callous, but be brave enough to risk sacrificing their love for

their families while remaining confident that true love would win over opposition." The film also seemingly inspired him to make the pre-marriage ceremonies and rituals a long part of

the second half, spiraling the feel-good cinema trend that lasted long in our cinema, while the pattern was also set for NRI romances of all shapes and sizes to become a recurrent genre

In short, the film was the perfect mix of the traditional and the conservative, with the NRI versus Indian-in-Punjab clash becoming organic and not forced into the narrative.

A controversy, however, arose when Honey Irani (who had written Lamhe and Aaina for the banner) went to town stating that she had had a major role in the scripting.

Judiciously, the Chopras decided not to react.

The Firsts and 'Fasts' of DDLJ

Technically, DDLJ was the first Indian film to be made in Dolby NR, and this was the debut of actors Mandira Bedi and Parmeet Sethi (15 years later, Parmeet was to make his

But this was more a film that set multiple careers on the fast-track. Shah Rukh Khan admits that he attained true stardom and his lover-boy image only with DDLJ, ditto Kajol.

Pooja Ruparel, who played Kajol's younger sister, began to receive multiple offers of advertisements and even marriage proposals though she was still in school (and had done King

Karan Johar, who had joined friend Aditya as assistant, helped Manish Malhotra with the costumes and also played a small cameo as one of Shah Rukh Khan's buddies, also developed

his bond with the actor on the sets and soon cast him (and Kajol) in his debut directorial with Aditya's encouragement - Kuch Kuch Hota Hai.

Also, though Yash Raj Films was his citadel for long, veteran art director Sudhendu Roy was on sets this time merely to overview the work of his brilliant daughter Sharmistha Roy,

whose career also took off on the fast-track after two earlier films, one of which was for YRF (Yeh Dillagi, her debut).

Farida Jalal too got a boost as a character artiste, and confessed that she could quote her own price after this film!

While topper Saroj Khan did the rest of the songs, she had

differences with the Chopras and opted out, leaving Farah Khan to step in for the song 'Ruk Jaa O Dil Diwane', consolidating what Farah called her 'karmic bond' with Shah Rukh

Khan that continues to this year with her directing and choreographing his latest home production Happy New Year.

And the music, despite not winning major awards, remains a cult score. Composer Lalit Pandit of the film's Jatin-Lalit team recalls how Anand Bakshi, the late lyricist (actor Amrish Puri

is also not around on this occasion), would tell them, "Concentrate on this film, for this is the one that will make your careers! Don't worry about the others!" Bakshi, with his vast and

accurate experience, even predicted that if Aditya made even 50 percent of what he had narrated, it would be a film for all time!

How the duo got the film was a story by itself. The composers had gone for a condolence meet for the late R.D. Burman, and Asha Bhosle introduced them to Yash Chopra and lauded

their talent. Yash Chopra called them for a sitting a few days later. The music duo did not notice then how his son, Aditya, then just twenty-plus, was keenly observing them and

listening to their songs in the long meeting, which then included 'Mehndi lagaake rakhna' and 'Mere Khwabon Mein Jo Aaye'.

Nothing happened for a long while after this meeting, but one day, when the duo was recording at a studio, Aditya summoned them and even asked if those two songs were still

earlier, their careers really took off only after DDLJ. Ironically, they split after Aditya's Fanaa in 2006.

And the duo cherishes the tight hug given to both by the late producer F.C. Mehra after coming out of the premiere show and his telling them that they had achieved something truly

extraordinary. Very few films have music historic enough to have all seven songs remembered and hummed 19 years down the line.