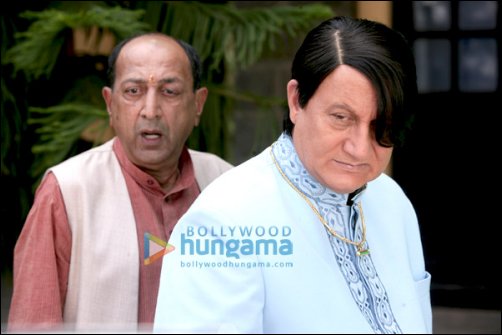 Disney's upcoming Bollywood feature, Zokkomon, directed by debutant Satyajit Bhatkal, and starring Darsheel Safary, Anupam Kher and Manjari Fadnis in the lead, has a special treat for Anupam's fans showcasing the actor as never seen before!

The upcoming action adventure from the Disney stables, Zokkomon will see the veteran actor with not just one, but two power packed performances in a double role. And we hear that the makers of the film have gone all out to make the two looks visually spectacular and different from each other.

Disney hired the famous prosthetics expert from France, Guillaume Castange who spent months remodelling Anupam's face, first on computer and then with specially designed prosthetics pieces before a completely new actor was created.

One of the roles involved spending almost five hours getting into makeup. Anupam had a different nose, different eyes, different facial structure and height. His transformation was so spectacular that while filming in Film City, his wife Kirron Kher, who was also shooting nearby, failed to recognize her husband when he came to meet her in disguise.

What's also interesting is that to maintain secrecy about his look, the call sheet would list the name of Anupam Kher as Samar Singh, so that nobody knew it was the actor in disguise.

Fans can watch Anupam Kher in this special double role in Zokkomon which releases in theatres on 22nd April 2011.