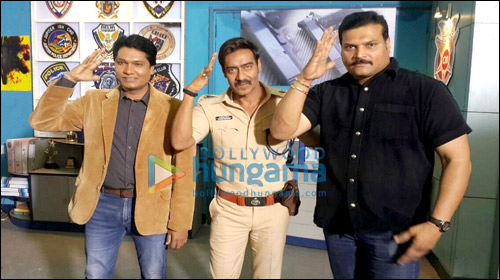 Ajay Devgn has been vigorously promoting his soon to release film Singham Returns. After various promotional outings meeting the fans, Ajay Devgn was on one of the longest running TV shows CID to promote the film.

Clad in his attire of a cop as Bajirao Singham, Devgn posed with the team of CID. The actor later posted a picture on twitter saying, "Shooting for CID today...yahan bhi sabki satakli #AataMajhiSatakli".

Singham Returns that is directed by Rohit Shetty and produced by Reliance Entertainment, Ajay Devgn Ffilms and Rohit Shetty Productions, also features Kareena Kapoor and is slated to release on August 15, 2014.