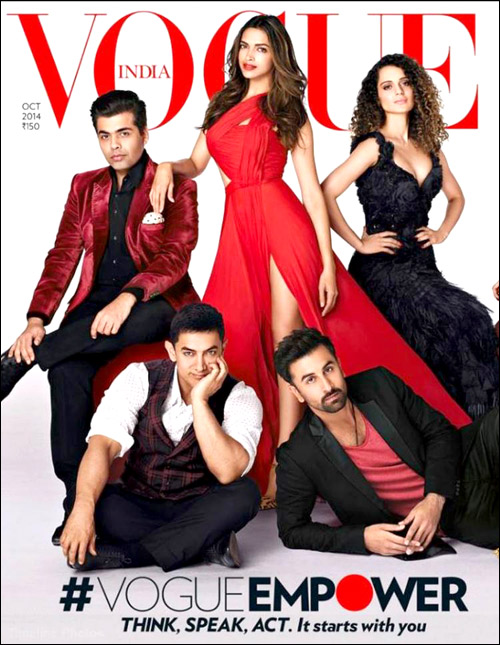 Earlier we had reported about how Ranbir Kapoor along with many Bollywood celebrities have decided to pledge for women empowerment through the latest initiative from Vogue titled #VogueEmpower. Now, we have got a glimpse of the latest cover of the magazine for this month's edition. In a bid to promote their campaign, the October edition of Vogue has more than five popular celebrities who feature on the cover which includes Aamir Khan, Ranbir Kapoor, Karan Johar, Deepika Padukone, Kangna Ranaut, Alia Bhatt, Ranveer Singh, A R Rahman among others.

Talking about the cover, the celebrities pose in shades of red, black, purple that proves to be a perfect contrast to the white background. Among the divas, DeepikaPadukone is seen in a red thigh high slit gown designed by Prabal Gurung. The actress had pledged to support the initiative along with her friend and filmmaker Homi Adajania. On the other hand, Kangna Ranaut who is celebrating womanhood through her films like Queen posed in a pretty black embroidered Alexander McQueen Fall 2014 gown with feather detailing. While these two actresses are establishing their niche in Bollywood, from the younger brigade, Vogue cover had the vivacious and multi-talented Alia Bhatt who posed for the magazine in a Zac Posen mermaid gown.

When it comes to the boys, while Ranbir Kapoor posed in black suit with the pink tee adding the pop of colour, Karan Johar opted for a red blazer with velvet touch. Aamir Khan kept it simple with white shirt and checkered sleeveless waistcoat and Ranveer Singh opted for a plum shade suit. A R Rahman too posed in a black-n-white suit.

Apart from them, the others who posed for the cover included journalist Barkha Dutt, social worker and author Sudha Murthy and Executive Director and Chief Brand Officer of Godrej Group, Tanya Dubash who represent the image of contemporary modern women.