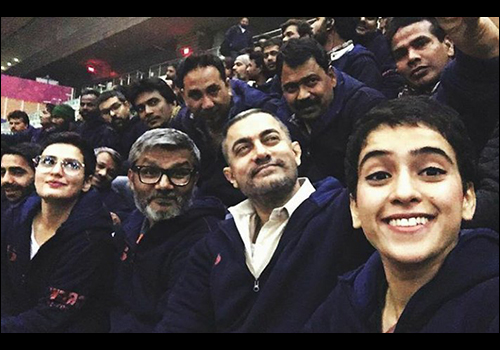 Ever since the inception of Aamir Khan starrer Dangal, the film has been in news for many reasons including the fact that it is inspired by real life. While it has gone on floor last year, we have been receiving several glimpses of the film that have even gone viral on the web.

Once again doing the rounds on social media are a few pictures of Aamir Khan bonding with the team of Dangal which also includes his on screen daughters Fatima and Sanya. Readers may be aware that Aamir Khan plays the role of popular wrestler Mahavir Phogat while Fatima and Sanya play the roles of Geeta and Babita Phogat respectively. Also playing Aamir's on screen wife would be renowned TV actress Sakshi Tanwar known for her roles in shows like 'Kahaani Ghar Ghar Kii' and 'Bade Achhe Lagte Hain'.

Produced by UTV-Disney in association with Aamir Khan Productions, Dangal is directed by Nitesh Tiwari and it is slated to release on December 23.