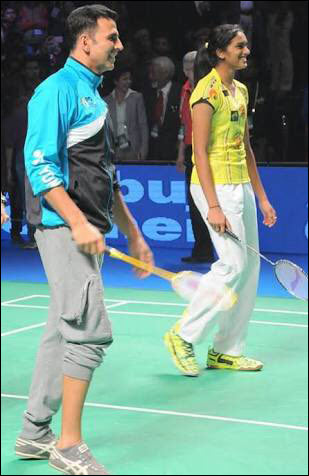 The epic win of PV Sindhu at Rio Olympics 2016, India's first woman to win silver medal, was followed with netizens showering praises at this victory. While Bollywood celebrities too shared their excitement and appreciation, Akshay Kumar too took to social media for the same.

He posted on Twitter about the victory of PV Sindhu saying, "Every cloud has a silver lining indeed! First Olympic silver in Badminton for India! Thank you @Pvsindhu1 Huge respect #Rio2016". Soon what followed was a unique picture where Akshay Kumar is seen playing with PV Sindhu at the Premier Badminton League (PBL). The superstar shared a picture of the same on Twitter and also added, "Always knew u were an achiever. U managed to convert a cricket obsessed nation to watch badminton @Pvsindhu1! #proud."

Last seen in Rustom, Akshay Kumar announced his next venture with Neeraj Pandey titled Crack which is slated to release during Independence Day next year.