Last Updated 03.07.2022 | 9:13 PM IST
feedback language
follow us on
Bollywood Hungama » News » Bollywood Features News » Cannes 2022: Meera Chopra steals the show in this glamorous gown as she walks with the team of her film Safed

Amidst many celebrities, from Helly Shah to Deepika Padukone, the 75th Cannes Film Festival has been a treat for the Indian audiences. Besides the actresses, actors like R Madhavan and superstar Kamal Haasan too attended the prestigious festival at the French Riviera. And now, we hear Priyanka Chopra’s cousin Meera Chopra too walked the red carpet and it was for her film Safed. Accompanying her were the film’s team which included leading man Abhay Verma, director-writer Sandeep Singh, producer Vinod Bhanushali and co-producers Vishal Gurnani & Juhi Parekh Mehta. 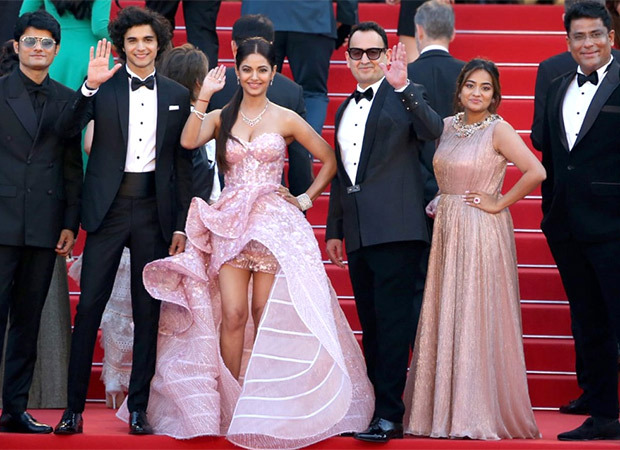 Cannes 2022: Meera Chopra steals the show in this glamorous gown as she walks with the team of her film Safed

Meera Chopra made her debut appearance on the red carpet of Cannes in a glam avatar and needless to say, it left fashionistas awestruck. The actress opted for Sophie Couture ball gown with sequin work. The off shoulder gown added ample drama, so keeping up with it, she opted for a light makeup do and a simple ponytail hairstyle. Ruby and diamond earrings and matching necklace from the house of Blingvine finished off her debut red carpet appearance at the French Riviera. On the other hand, the men from the team of Safed, opted for a black tuxedo with white shirt. Director Sandeep Singh sported an all-black avatar with black shirt and bowtie.

On the other hand, yet another appearance was shared by the actress in an earlier post on Instagram. This one featured her in a shimmery gold ensemble with minimal accessories and makeup with an updo. Have a look:

Safed stars actors Meera Chopra and Abhay Verma in the lead while it is written and directed by Sandeep Singh. The film is presented by Bhanushali Studios Limited and Legend Studios, and is produced by Vinod Bhanushali and Ajay Harinath Singh and co-produced by Kamlesh Bhanushali, Vishal Gurnani, Juhi Parekh Mehta and Zafar Mehdi.