It is celebration time in the Kapoor family as Sonam Kapoor is all set to tie the knot to her entrepreneur beau, Anand Ahuja. The preparations for the big fat Punjabi wedding are on in full swing. Though the wedding affair will be private with close family and friends in presence, it is still going to be a wedding to remember. 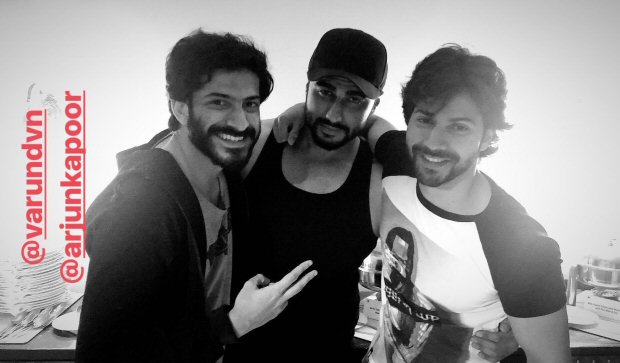 It is rumoured that Arjun Kapoor and Varun Dhawan will perform at Sonam Kapoor and Anand Ahuja's sangeet ceremony. The entire Kapoor family is prepping for the same including the close friends Varun Dhawan, Jacqueline Fernandez and Karan Johar. The bride-to-be's brothers Arjun Kapoor, Harshvardhan Kapoor and close friend Varun Dhawan are definitely gearing up for pre-wedding festivities. Harshvardhan shared a picture with his cousin Arjun and Varun last night. Smiling for the cameras, it seems like they were prepping for the sangeet ceremony. Though it has been learned that Harshvardhan won't be performing at the sangeet, one can expect the other two guys to put up a grand show.

Harshvardhan Kapoor, on the work front, is gearing up for his second film, Bhavesh Joshi Superhero. According to the official synopsis, it is an action film about a young man who wants to continue doing the right and challenge the wrong. And on this journey, he discovers that he is destined to do bigger things, which will transform him from a common man into a Superhero. Directed by Vikramaditya Motwane, the film will release on May 25.

Varun Dhawan, meanwhile, is busy shooting for Dharma Productions' Kalank. The film stars an ensemble cast of Madhuri Dixit, Sanjay Dutt, Alia Bhatt, Sonakshi Sinha, Aditya Roy Kapur! The film, which was incepted 15 years ago by Karan Johar and his dad Yash Johar, has found its way. Directed by Abhishek Varman, it will release on April 19, 2019. Besides this, Varun Dhawan has an array of projects lined up. He is starring in YRF's Sui Dhaaga- Made in India and an untitled dance film with Katrina Kaif.

Arjun Kapoor, six years after their first film together, is returning with Ishaqzaade co-star Parineeti Chopra in Namaste England. The film has been preponed and will now release during Dussehra 2018. Before that, they will come together for Dibakar Banerjee’s Sandeep Aur Pinky Faraar which is set for August 2018 release.