Kareena Kapoor Khan and Saif Ali Khan always take their holidays abroad during summers and winters. Last year, they travelled to Switzerland with their baby boy Taimur Ali Khan. Saif Ali Khan, who has been shooting Navdeep Singh's historical drama, has taken some time off to spend time with family. Saif and Kareena are currently in London for few days. 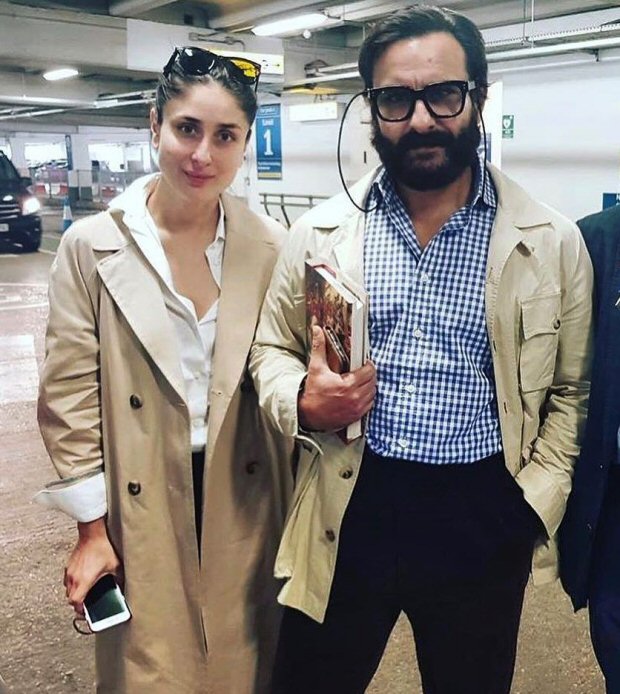 In a photograph that is doing the rounds of social media, Saif Ali Khan and Kareena Kapoor Khan were snapped at the London airport. Both of them posed with a fan. While Kareena looked pretty in white shirt teamed with denim, Saif is seen sporting checkered shirt and trousers with wayfarers. Both of them twinned in beige trench coats. Kareena will return soon to kickstart Veere Di Wedding promotions. They will take a proper summer vacation to London with their son next month.

Meanwhile, Saif Ali Khan is busy with many projects. He will be starring in Navdeep Singh's historical drama and Baazaar. He is also starring in Netflix India’s original series called Sacred Games. The show also stars ‪Nawazuddin Siddiqui and Radhika Apte in a gritty drama. Based on Vikram Chandra’s novel by the same name, Sacred Games is a crime drama that delves into the dark and gritty world of Mumbai city. It features the Saif Ali Khan in the role of Inspector Sartaj Singh. The show will also star Nawazuddin Siddiqui in the prominent role of gangster Ganesh Gaitonde. Radhika Apte plays the role of RAW analyst Anjali Mathur. Based on reality, the series will trace the deep nexus of crime and politics as it takes you through the life of a police officer named Sartaj Singh. Sacred Games will premiere on July 6, 2018.

Kareena Kapoor Khan, Sonam Kapoor, Swara Bhasker and Shikha Talsania are all set to bring a complete chick flick and an out and out entertainer with Veere Di Wedding. The film is directed by Shashanka Ghosh, produced by Balaji Telefilms, Anil Kapoor Films & Communication Network and Saffron Broadcast & Media Ltd. Veere Di Wedding is slated to release on June 1, 2018.