After the grand wedding of Anushka Sharma and Indian Cricket Team Captain Virat Kohli in Tuscany, it is time for another celebrity wedding. Bollywood fashion diva Sonam Kapoor is all set to marry her businessman beau Anand Ahuja in a big fat Punjabi ceremony. Though the wedding will be a private affair, the wedding shenanigans have begun in full swing. The close friends of Kapoors and Ahujas have begun the preparations for the upcoming wedding. Varun Dhawan, Karan Johar, Sonam's cousin Arjun Kapoor, BFF Jacqueline Fernandez and other family members have begun the prep for the grand sangeet ceremony. 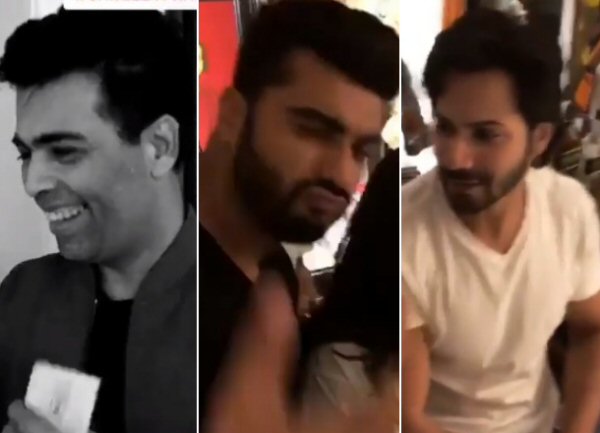 As the wedding will take place on May 8, the family members and friends reached Anil Kapoor's residence to begin the dance rehearsals for the sangeet. Last night, Varun Dhawan came to Anil's house from his Kalank shoot to get the dance mode on. Karan was seen filming the rehearsals as Sonam's cousins including Anshula Kapoor, Jacqueline Fernandez, Shanaya Kapoor, close friend Kunal Rawal and others were rehearsing. Arjun, Rhea Kapoor, and Varun Dhawan were seen chilling and enjoying the wedding festivities mood.

Sonam Kapoor and Anand Ahuja released an official statement about their upcoming wedding which will take place on May 8, 2018 earlier this week. While the entire family is absolutely excited, they are keeping the wedding a private affair reportedly due to the tragic loss of Sridevi earlier this year.

On the work front, Sonam Kapoor will be seen in Rhea Kapoor and Balaji Motion Pictures‘ Veere Di Wedding with Kareena Kapoor Khan, Swara Bhaskar and Shikha Talsania. Directed by Shashanka Ghosh, the film is set to arrive on June 1, 2018.

I personally take steps to reduce my carbon…