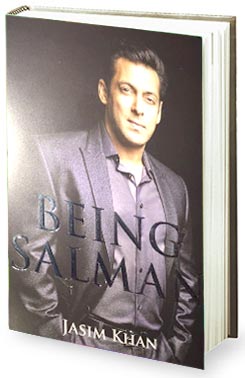 What an epic disappointment!

This is what you end up exclaiming not just when you reach the end of the book, but by the time you are at Page 70. Reason being that it is only after this when author Jasim Khan decides to begin talking about the life and times of Salman Khan. Otherwise before this, close to 50 odd pages are dedicated in exploring the ancestral roots of the Khan 'khandaan'. As a result, a reader is exposed to grandfather, great grandfather and many generations before that as Jasim takes it upon himself to go through the research route and travel back in time.

Well, frankly, all of this may be of interest to only a select few who like to explore the slice of history. As for the regular readers, to whom the book has been set well as Being Salman, the core idea is to know more about Salman, the man. In case of this book though, one has to wait for a really long time before one gets to read about the superstar who has just turned 50.

As a result, this 180 odd page book has Salman making an entry only around the 70 page point, hence resulting in a scenario where it seems that the very hero has made a belated entry into his own film where he was pitched as a central protagonist!

What is further painful is to actually find nothing new at all in the book. While Jasim has been honest enough to mention right at the beginning of the book that neither Salman nor Arbaaz or Sohail were available to him for any interview, this doesn't count much because at the end of it all, one looks forward to some interesting enough material, which is sadly missing out there. Yes, Salim Khan does give a few quotes occasionally in the course of the book but again, most of the stuff out there is the kind that has already been heard or seen before.

So whether it is about Salman's tryst with multiple girlfriends during last 30 years, the manner in which he bagged Maine Pyaar Kiya, his sudden rise, then a series of flops that he suffered, and then the resurgence post Wanted, everything is pretty much narrated with tales that have already been heard before. Yes, there are a few tidbits around his childhood which are new to the readers but again, none of that is detailed enough to actually know much about the man behind the superstar persona.

As for those who would have liked to see the dark side of Salman being exposed by Jasim, again there is nothing interesting out there as an entire chapter dedicated on the blackbucks case is straight out of the court records while for the hit and run case, he has already been given a clean chit. On the other hand his brighter side of Being Human again has only that information which is already out in the public domain.

Result? The book eventually just comes across as a compilation of information which is either already available online or in the print archives. As for the only new thing in there, the ancestry of Khan family, it is only for those who have an academic interest in knowing what happened back in the 1500s and the 1600s. If you are interested in those history lessons, then go for it. On the other hand those who really want to find out more about Salman Khan and his persona, guess the wait has already begun for the next book - with Salman perhaps volunteering as a subject to commission an autobiography - to hit the stands.