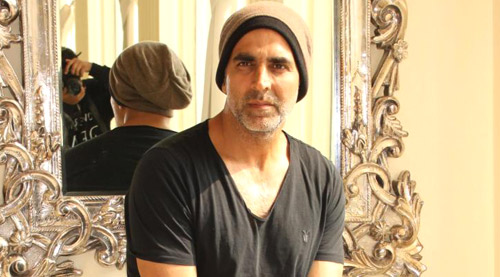 It all started with Baby in January 2015. Ever since then, Akshay Kumar has already scored three more releases in the form of Gabbar Is Back, Brothers and

Singh Is Bliing. Now in a span of exactly 12 months, the man would have his fifth film hitting the screens - Airlift. While his contemporaries are churning out one or at maximum two

films in one year, Akshay Kumar is pretty much setting a record of sorts with as many as five releases to his name.

Tirelessly moving ahead and stepping into films as diverse as Housefull 3, Robot 2 and Rustom, Akshay gets chatting before heading for a family vacation to Hong Kong where he would be

bringing in the New Year.

Teaser of Airlift is clearly ruling the show, what with 97% likes already with close to 6 million views online. This is not just the best ever for your film but the best ever of 2015.

I can't express how lucky I feel, especially with the kind of ambitious cinema we have had in 2015. It has been a whopper of a year! The feedback I have experienced for Airlift is so immense

and so genuine that I haven't quite got my head round it yet. Remembering this is just a teaser, we were still shooting for Airlift when we released this. However, because of the humbling

response from all over, we haven't even had a trailer launch; this has been enough to make people sit up and recognize the 'Story That's Never Been Told'. This is a first of a kind for me; I have

never 'not had to' launch my film. The power of digital media truly has changed the face of films in India.

From Special 26, then Holiday to Baby and now Airlift - Can one see this film as a fourth appreciated innings after a successful trilogy of inspired true stories?

One can only hope! Who would have thought that the action packed comedy clown 'Akshay Kumar' would want to make so many real life dramas, where the action becomes painfully raw and the stories hit

home so hard that it makes you look at life a little more differently. Airlift deserves recognition, whether I do or not I leave that up to the audience. But the story itself is worth being told;

that's what makes me want to show our people that it is something to be so proud of, to the point where it should be 'compulsory in history' and taught in all our schools.

That would be something.

Yes, this isn't a fable to be enjoyed, this is a 'Heroic Common Man Endeavour (which is perhaps the reason why it probably hasn't been over dramatized by media or by the government) because it took

average men with hearts of Gold to accomplish the safety of 1,70,000 Indians in the biggest air evacuation of all time. Rather than a heroic mission planned by our forces, it was a common man's

problem and it took common men and their wives to fix it.

You seem to be truly fascinated with the subject.

That's because it's not just a film, it's an insight into the harsh going-ons and the bravery it took by average citizens to rescue its terrorized people, when not even governments could stand a

chance in a war zone. Brave civilians travelled tirelessly through deserted terrain in desperate hope that their fellow Indians from their beloved motherland would have the courage to 'airlift'

them all out of Kuwait, where they had made a new life away from India. However, now they needed desperately to be brought back to safety, all 1 lakh 70 thousand of them. Even when people turn

their backs on India in search of better horizons, India never turns its back on its people. A story so true that it makes you love your country even when you have forgotten how to!

Guess the fact that you have three to four releases a year at an average gives you all the more scope to play around with varied genres, isn't it?

By the time Airlift releases, this will be my fifth film within 12 months. So when I work this hard and this much, it gives me more freedom to branch out into many different aspects of Hindi

cinema. You see, I don't like to put all my eggs into one basket. I am not ready to only pray for one humungous success in a year, not yet anyway. I am actually really enjoying the full mix match

of genres I am playing with right now; it keeps me on my toes and the audience happy that they know I am not dishing out the same kind of cinema that works in hope that it will make money.

That's a visible change for sure.

See, I have reached that stage where the success of a film doesn't mean as much to me as the interest or the appreciation it can earn wholeheartedly. Not all Blockbusters are worthy; I say that

from my own experience. As wonderful as it is to break records, there are very few that make it into the 'Cult Club' forever. These are so precious and rare; no one can dish out a 'Cult' every

year, but there is no harm in entertaining people while you wait eagerly for that magical script/screenplay that blows the audience away for the rest of their lives. And I am happy making films

that intrigue excite, entertain people while I search for my next Hera Pheri, Waqt or Namaste London (winks).