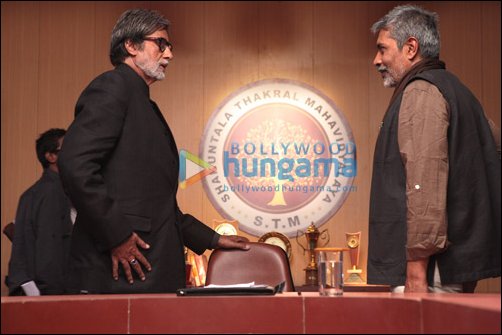 For Aarakshan, we first heard about the Big B borrowing the exact cut of Prakash Jha's beard and hair for his character. It now turns out the Big B borrowed not just his facial look but also the clothes worn by Jha to play the college professor.

Says a source, "It started with the beard and hair. Amitji said he wanted that exact cut because that's how he envisaged his character of the college professor Prabhakar Anand. Then when he sat down to discuss his character's clothes with his designer Priyanka Mundada, Mr. Bachchan thought the clothes should also be replicated from the director. All the deep-coloured kurtas, the khadi jackets and the checked mufflers that you'll see Amitji's character in Aarakshan wearing are all borrowed from the director's wardrobe."

Apparently, the Big B even insisted on actually borrowing some accessories from Prakash Jha's wardrobe.


Laughs Jha, "Nothing as drastic as that. But yes, Amitji did decide to model his character on me in every detail, including the clothes. I am quite flattered because I've never paid attention to what I wear or how I look. So if Amitji saw our hero's character in me I must be doing something right."


Adds the dress designer, Priyanka Mundada, "It was really interesting when Mr. Bachchan, Prakashji and I were discussing his look when Mr. Bachchan looked at Prakashji, pointed to him and said, 'That's it. That's Prabhakar Anand.'


Adds Mr. Bachchan, "We jointly agreed on that!"