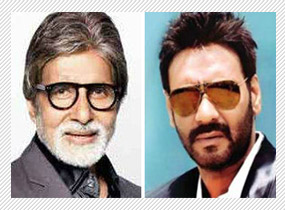 If the script of Satyagraha would have stayed on as per the original draft, the film would have featured only Amitabh Bachchan and Ajay Devgn. While they were the first and the only choices for Prakash Jha, the filmmaker was also content with the way he wanted to tell the story of Satyagraha. As for Arjun Rampal, one of the favourites with Jha since the days of Raajneeti, he was not even in the radar.


"That, when he had delivered a fantastic performance in Raajneeti," informs a source, "Prakash Jha was sure that Amitabh Bachchan and Ajay Devgn were the pillars of Satyagraha. He was going ahead as planned."


It all seemed well too since after a rather curtailed part in Raajneeti, Ajay was raring to go. On the other hand after a rather forgettable outing in Aarakshan, there had to be something special by Big B-Jha combo in Satyagraha. Meanwhile Manoj Bajpai, a steady associate of Jha right from Raajneeti, Aarakshan and Chakravyuh, was a straight forward choice as a baddie.


"This is when in a conversation with Arjun during the shooting of Chakravyuh, Jha casually asked him if he would be interested in being a part of Satyagraha," the source adds, "Arjun was obviously thrilled but still wanted to know what Jha had in mind. Jha too knew that to bring in Arjun into this multi starrer affair, the role would have to be really strong. He assured Arjun that there would be something special for sure and told him that he would revert soon."


Once Jha went back to the drawing board, he included the part of an aspiring politician into Satyagraha and integrated it with the characters played by Bachchan and Ajay, who play a professor and businessman respectively.


Confirms Arjun, "It turned out quite well and I was sold. Not that I had to be given too many explanations. Prakash Jha is my favourite director to work with. I trust him blindly. The moment he said he was thinking about me, I immediately knew that he would challenge me with something exciting all over again. I really respect him. I am glad he built a space for me."


With the space only leading to the crowd swelling further, one hopes that it is indeed the case of more the merrier.

Varun Dhawan shares pictures of his…