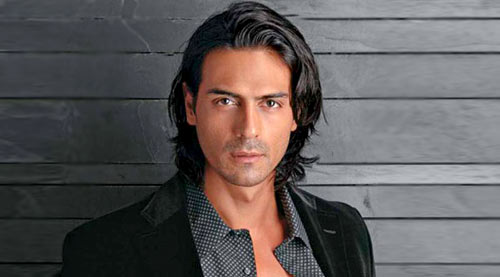 Professionally, Arjun Rampal has been lying low for more than year. He has had no release for more than a year. However, he has been constantly in the news for various off screen activities and controversies.

The actor, last seen in Prakash Jha's Satyagraha, for the first time, reveals the turmoil that he has gone through.

He states, "While the media has been writing about other things, I was busy nursing two ailing parents last year. I eventually lost my father and my mother who has been diagnosed with cancer is now healing, touch wood."
He admits it's not been an easy time. "You learn to cope with what life gives you. When the problems arrive unannounced you have no choice but to deal with them as best as you can. No one can help you get out of your problems."

Sighs the suave actor, "The last film I was seen in was Prakash Jha's Satyagraha. And that was a good 18 months back! In our film industry, that is a long time to stay off screen. But I am not insecure. There was no tension for attention. There were things in my life that needed my attention. Luckily, my new film Roy is just the kind of film that I'd want to be seen in after such a long break."

In Roy, Arjun gets to play an ultra-cool retro-guy. "He's a fascinating character. He is very much a man of today but likes to dress, talk, walk and luxuriate in the past. He moves around in vintage cars, wears hats and uses a typewriter instead of a computer. It's a fascinating fusion of the cool-dude and old-world charm," enthuses Arjun.


He had a lot of fun with the character, expanding its retro-space with his own insight into fashion.

The small-town actor is deeply impressed by his Roy director. "When I heard Vicky's script, I felt it was something I had never done. It's a lot of things all together. It's a drama, a thriller, a mystery story and a love story. It's amazing how effortlessly Vicky gets these elements together in a tone that is unapologetic. He isn't the least interested in diluting his vision by bringing in massy elements. He isn't doing anything for effect."

Roy also gives Arjun Rampal a chance to work with a buddy Ranbir Kapoor. "We hit it off famously during Raajneeti. In Roy, we do have scenes together. But I can't reveal how and why we are thrown together in the film."

Arjun refutes the belief that Ranbir Kapoor has only a cameo appearance in Roy. "It's a full-fledged role. Ranbir plays the title role. How can he be there only for a bit? He has a well-defined number, and so do I. Roy is like a new beginning for me. I am putting a closure to my troubles last year to start afresh."