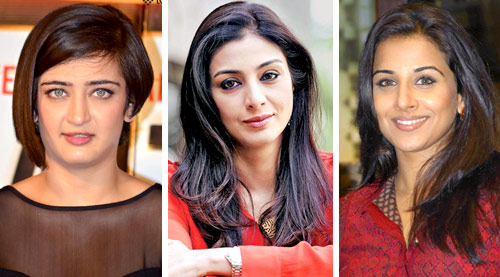 Akshara Haasan is the first star-kid to have made her debut in 2015. Of course, when a film is titled Shamitabh, it is but natural that Amitabh Bachchan would be leading from the front and Dhanush won't be much behind. In that case, one may well have wondered if Akshara would get a fair deal after all. However, the pretty young woman has managed to surprise one and all with a confident act in this Gauri Shinde, Abhishek Bachchan and Sunil Lulla production. Also, after seasoned actresses like Tabu (Cheeni Kum) and Vidya Balan (Paa), Balki has managed to extract a notable performance from a newcomer as well.

You must be happy with the way your performance has been appreciated. After all, all eyes were on you to see how you perform on screen, especially since it is your debut film?
What was right in front of me was my work. All that mattered was how I created my own ground as an actor. To begin with, I had to be disciplined. Then to make an impact as an actor, I had to be honest. That's what helped me immensely. And then of course the guidance that came from Balki in helping me become that character was immense.

Did you always want to start your acting career with an unconventional film?
No, it wasn't planned out that way really. The way Shamitabh came to me; it was very interesting and simple. Balki had seen me in a function where we discussed a lot of things, but everything except movies. It was almost a year later when we met again in a different function. There were could talk for just five minutes and he narrated a film's concept. I thought it was an amazing opportunity and perhaps he wanted me to assist him. After all, till that time, nobody knew that I had made this decision to become an actor (smiles).

So did you surprise him by telling him about your desire to act instead?
No, in fact, he surprised me by telling me that he had this character in mind for me as an actor. I was like 'wow, he can't be serious'. Then he went on to narrate the synopsis to me. A week later we had a script discussion and I was bowled over by it. My unconventional look was something that worked with his vision. He was happy that I was very flexible to cut my hair and get into altogether different attire. He had a new look planned for me and I didn't mind that at all. I am fine with anything as long as it goes well with the character. In my next film, I may carry a different look altogether.