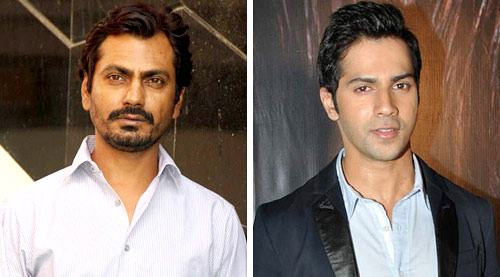 Varun Dhawan and action director Parveez Khan recall an action scene that went a tad out of control from Badlapur.


A certain combat sequence between Nawazuddin Siddiqui and Varun Dhawan in Badlapur will stun the audience. According to the film's action director, Parveez Khan, shooting it was quite 'frightening' as Dhawan almost blacked out during the shoot. Filmed on a set constructed in Pune, the sequence required Siddiqui to strangle Dhawan who has just tracked him down. He had to pull a chord, which was dangling, twist it around Dhawan's neck and wring it with Dhawan struggling to break free.


"Both Nawazuddin and Varun are very passionate actors and wanted to make sure that the scene was shot realistically. Everything used during this fight was real from the thick chord to the table on which Varun falls and hurts himself. Nawazuddin used his full strength while trying to strangle Varun! The grip was so tight, just like that of a man who wanted to ensure that his opponent died, that Varun's eyes turned bloodshot," explained the action director.


Khan went on to explain that action sequences like these between two actors required perfect co-ordination between them. "It is very crucial for them to discuss the strategies to know how much pressure to use in the grip till the other feels the pain for it to show on his face, and when to loosen the grip (in this case after 40 seconds)." Discussions between the two prior to the shooting are important for the scene to look real and be captured without any mishaps. Had Siddiqui held on to Dhawan's neck a tad longer, the latter could have fainted.


Meanwhile, Dhawan who also recounts the scene says. "Nawazuddin and I rehearsed the movements and at that time I didn't know that I would turn blue while shooting. There were only two-three takes because had there been more, I don't know what would have happened, but, it's a scene to watch out for."


"During the tussle, Varun's falls and his bruises are also real. I must say both actors really infused life in their scenes," added Khan.


Badlapur is helmed by Sriram Raghavan and produced by Dinesh Vijan and Sunil Lulla. It releases on February 20.