While the Big Six [Khans, Akshay Kumar, Ajay Devgn, Hrithik Roshan] are the most reliable of them all and the younger ones [Ranveer Singh, Varun Dhawan, Ranbir Kapoor, Tiger Shroff, Arjun Kapoor] are keeping the audiences engaged with their films, veterans are continuing to be in circulation as well. The latest success of 102 Not Out has yet again shown that, what with Amitabh Bachchan and Rishi Kapoor delivering a money-spinner. 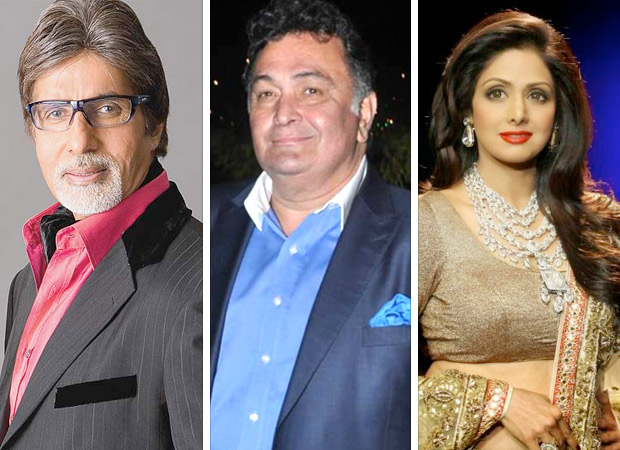 Amitabh Bachchan, Rishi Kapoor and Sridevi – Actors who have shown that old is still gold at the Box Office

The film has now crossed the Rs. 35 crore mark and the manner in which is currently progressing, a lifetime between Rs. 45-50 crore is a possibility. If it indeed touches half century mark, it would indeed be the first ever (at least till the memory goes) when a film would have done such good business despite the absence of any other 'star support', be it from the past or the current generation.

The Umesh Shukla directed film has been front-lined by Amitabh Bachchan and Rishi Kapoor who have been in the business for more than four decades and are certainly not the ones who are classified as leading men in commercial parlance. However, they are the central protagonists for sure in 102 Not Out and that too with no cushioning whatsoever. So much so that leave aside any other leading men or women, there is no notable supporting character either with the only known faces being the two veterans.

No wonder, it is indeed remarkable that 102 Not Out has still been accepted whole-heartedly by the audiences entirely on the power of these two men who have regaled audiences for decades, as well as the content which has clearly been accepted.

As a matter of fact the only other veteran actor who has delivered a bigger success while being the central protagonist is Paresh Rawal. However, even his OMG Oh My God!, which had done business in the upwards of Rs. 80 crore, had the star power of Akshay Kumar adding very good support. Incidentally, that film too was directed by Umesh Shukla. Another film where Akshay Kumar had played a supporting role was The Shaukeens but there the coming together of Anupam Kher, Annu Kapoor and Piyush Mishra wasn't really accepted by the audience.

No wonder, Amitabh Bachchan is still the man to go when it comes to spearheading a film on his own, as was the case with Bhoothnath Returns which went past the Rs. 40 crore mark entirely on his 'dum'. After all, the film had no one other than him to entice audiences.

Same was the case with Sridevi's English Vinglish too where her face was the only selling point. The film went ahead and garnered Rs. 40 crore, a total which was not just respectable but also quite reasonable if one looks at the manner in which quite a few starry affairs also fall flat on their face. However, Sridevi scored in her comeback affair. Later she led the show in Mom, a serious drama, too but then Akshaye Khanna and Nawazuddin Siddiqui were there in good measure as well.

Nonetheless, it has been a loss for Bollywood that Sridevi is no more and hence all eyes are now on whether Madhuri Dixit would be able to pull off her Marathi venture Bucket List.

Also Read : Amitabh Bachchan and Rishi Kapoor starrer 102 Not Out to be screened at Rashtrapati Bhavan