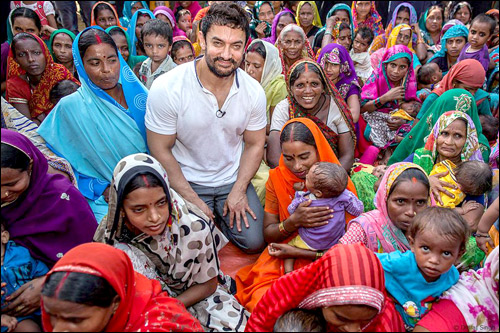 Actor, director and producer Aamir Khan has become Ambassador for UNICEF in South Asia. In this capacity, Aamir Khan will support UNICEF's work to promote the right of South Asian children to nutrition, with a focus on ending stunting.

"I am delighted to become an Ambassador for UNICEF in South Asia. I hope my messages on the importance of children's nutrition will urge parents, families, and leaders at all levels to support and adopt proven services and nutrition practices that will help children grow and develop to their full potential," Khan said.

"With the immense respect that Aamir Khan commands across South Asia, we are convinced that Aamir will make a lasting difference in the fight against child stunting, potentially the biggest threat to children's growth and development in this part of the world," said Karin Hulshof, UNICEF Regional Director for South Asia.

During his visit to Nepal, Mr. Khan also took part in the launch of the "1,000 Golden Days" national nutrition campaign. The most crucial time to meet a child's nutritional needs is during the 1,000 days from conception to the child's second birthday. Proven and effective interventions during this time can prevent malnutrition and drastically reduce the prevalence of stunting in young children.

Aamir Khan becomes UNICEF Ambassador as they celebrated the 25th anniversary of the Convention on the Rights of the Child (CRC). The CRC has inspired domestic legislation to respect, protect and fulfill child rights in all eight countries of South Asia, as well as the creation of policy and national development plans for their implementation. Yet, pervasive poverty and disparities prevent millions of children in South Asia from living in dignity, reaching their potential and making choices about their own future.