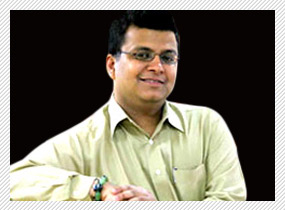 It's been more than a week since Kyaa Super Kool Hain Hum released and it boasts of Rs. 23 crores opening weekend collections in the

holy month of Ramzan. Need I say more? Few men exemplify Bollywood muscle so completely as CEO and producer Tanuj Garg. He speaks softly with no need to

emphasise or charm. He's a man who's used to be listened to, and with his comprehensible knowledge about the Hindi Film Industry, there's one thing you can expect

coming from Mr Garg - a definite blockbuster. I'd say - he's just content to let his films do the talking for his mantra is 'bums on seats and cash in tills'. In this Part 2

exclusive, the CEO of Balaji Motion Pictures throws light on franchise films, the Dharma-Balaji tie-up, animation, music and his unconventional approach to movies.

Do you think franchise movies are the new way of keeping the box office happy?
You've got Spiderman, Batman, Superman, Toy Story, X-Men, Harry Potter, Transformers, etc., which are the major money-spinners in the West. A franchise has

a ready audience and historic data has proven that sequels fare better than the originals. You want to go and watch Housefull 2, Agneepath or even a Kyaa

Super Kool Hain Hum. These movies will always work at the box office.

You've been having tie-ups with every production house and studio, new and old. How's it going?

It's not with every production house, as you put it. We are selective in our creative partnerships. So far, we've only collaborated with

Tell us about this lethal partnership between Dharma and Balaji. It's fiery, isn't it?
It is! Dharma is like family and there is a fabulous relationship in place. When Balaji heard the concept and developed it, we realised that Dharma would be a perfect

partner. Karan had his own inputs and recommendations and strengthened the script even further over a month. Between Ekta and Karan, they spent four months on the

material before saying, "Ok, the script is now ready to go!" This partnership will be a treat to watch.

Will Balaji ever produce an animation movie?
Animation is not on our agenda at the moment. To be honest, animation as a concept genre hasn't worked in India. It's also down to the market because audience aren't

accepting such cinema and are not prepared for it to come from India as they are now exposed to much higher standard of storytelling from the West, thanks to Pixar and

having my own likes and dislikes for music, I am always a ready adviser, critic and a contributor if I think there's something good that fits into our movie.

With an unconventional approach to films, isn't it tough for Balaji to produce such diverse genres?
I think Balaji is one company that is trying to play unconventional cinema whilst letting it be commercial. There's no point also producing stuff that's confined to your living

rooms. We keep that in mind. I guess the philosophy and mindsets need to change in order to bring about a change in cinema.

Anushka Sharma responds to a viral video of…