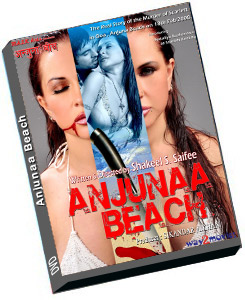 A complete mockery is made of the real life story of English teenager Scarlett Keeling, who was found, raped and murdered in Goa in 2008. The film tries to relive the moments while also making audience sympathetic to the incident. However, neither does it manage to take a reality route nor does it get into the soft-porn zone either (which could actually have been the target audience for the film). A big bore, it doesn't even lead to unintentional laughter.

When films belonging to such genre are made, time and again one see certain amateurish attempts on screen. Some are shabby; some are laugh worthy while some are at least earnest. Well, Anjunaa Beach doesn't fall into any category. It is just plain and simple ridiculous as some set scenes are combined one after another in the name of a narrative, hence leading to disastrous results.

For starters, not even one principle protagonist in the film can act. Italian-Ukrainian model-actress Nataliya Kozhenova, who has made her debut in with Anjunaa Beach, is plain terrible with her performance. She doesn't even bring any oomph on screen while her dialogue delivery (or whoever has dubbed for her in Hindi) is of the lowest standards. Least said about the costumes, the better, since it is anyways a bottom of the barrel setup for the film.

However the cake is taken by the lady who plays her mother. Farha Naaz, who is said to have her bearings in Iran, has to be seen to be believed in the way she approaches the part of a hassled mother. Boasting of a screen time which is lengthier than that of Nataliya, she practically delivers each and every dialogue with her eyes closed. Don't believe this? Well, try checking out the DVD. Add to that some sundry men who start arriving out of nowhere and seem more like opportunists who just wanted to take Nataliya to bed than actually being her friends, they take acting to a new low.

No wonder, you realize that veteran actor Kiran Kumar turns out to be the best of the lot in this film where he actually dominates the entire second half. As a lawyer fighting Nataliya's case, he surprisingly shows good conviction in a thankless role. One wonders how he would have managed to keep a straight face and continue acting after realizing on the very first day of the film's shoot that he had been entrapped in the setting. Perhaps the motivation factor for him was to reprise a role which is exactly similar to that of what Sunny Deol had played in Damini. Remember the lawyer fighting the rape case of a maid?

The film's duration is 100 minutes

There have been C-Grade films and there will be C-Grade films. However Anjunaa Beach takes the cake. So much so that even Kanti Shah films start seeming like classics in comparison.