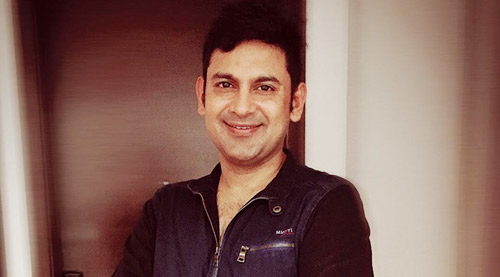 2015 ends with optimism on the lyrical front, because Manoj Muntashir, whose past work includes 'Galliyan' (Ek Villain) and the exotic lyrics of Rang Rasiya last year, has blitzed his way to the frontrunner class among songwriters, and that without working with the A-list composers of today.

His biggest triumph this year was Bahubali-The BeginningÂ¸ for which he penned all the lyrics as well as the dialogues, besides the Tiger Shroff single, 'Zindagi Aa Rahaa Hoon Main' and the Ek Paheli-Leela song, 'Khuda Bhi'. He also wrote 'Lamhein', the Mohit Suri-directed single for Anmoll Malik, which was adapted from Coldplay by her father Anu Malik.

"The year has been great for me," says the affable writer. "This year I have won six awards, including the ABP News Achiever of the Year award, and am now doing about 18 films, 7 of which are as solo writer!"

What gratifies Manoj is the fact that many of these films are with musical filmmakers like Milan Luthria (Baadshaho), Vidhu Vinod Chopra (a song in Wazir), Neeraj Pandey (Missing, M.S. Dhoni: The Untold Story, Rustom) and S.S. Rajamouli with composer M.M. Kreem (Bahubali-The Conclusion) besides being a signed artiste with T-Series and also doing their film Sanam Re directed by Bhushan Kumar's wife Divya Khosla Kumar besides their many singles to come.

He would rate his work in Bahubali as very significant and momentous for the simple reason that it was a dubbed film. "I would like to humbly take some credit for both the spoken words and the lyrics, because the feedback I got was that most people forgot that they were watching a dubbed film, which is why the film crossed 100 crore even in Hindi version."

Explaining that while it is difficult to maintain the gravitas of an already shot sequence in the Hindi idiom, Manoj says that it takes that "one extra step" to work within the "plethora of words available in Hindi and Urdu" to come up with the near-perfect matches. "Among the songs, the three lip-synched songs were the toughest for the same reason."

And for the Kailash Kher background numbers 'Kaun Hai Woh' and 'Jai Rahi Hain', director S.S. Rajamouli's brief was to use a language that sounded close to Sanskrit but with every word being understandable. In short, Manoj sums up, "I treated Bahubali... like a completely fresh film."

His excellence has won him the Bahubali... sequel, for which a Daler Mehndi song has already been recorded, and a song and the Hindi dialogues in Anarkali, a Malayalam film that has a significant chunk in Hindi in it and stars Prithviraj. Anarkali has just become a huge hit.

Manoj wanted to be a lyricist ever since he can remember ("I was 10 when I was exposed first to greats like Shailendra and Sahir Ludhianvi im Lucknow, where I was based") as he always had a fondness for music but tended to pay more attention to the words. "My songs 'Zindagi Aa Raha Hoon Main' and 'Khuda Bhi' are my way of giving tributes to Javed-saab and Rajendra Krishan-ji for their standout songs with the same words in Mashaal and Dharti respectively," he says.
The lyricist, who came to Mumbai with this ambition, soon became a star writer of reality shows like Kaun Banega Crorepati and many more for his bread and butter while struggling for over a decade to become a songwriter. "I have written India's Got Talent and Indian Idol Junior this year, but now, I will not take up shows where I have to adjust to big stars' schedules as I am busy with my first love-lyrics." For the record, Manoj's first film as lyricist was U Bomsi N Me ten years ago!

As of now, he is writing singles with Himesh Reshammiya, Mithoon and Jeet Gannguli and will be soon working on Tum Bin 2 and Aashiqui 3. "Not many know that Neeraj Pandey is treating M.S. Dhoni: The Untold Story as a musical with seven songs all composed by Amaal Malik," says Manoj. "Or that Prakash Jha has recorded 12 full-fledged lip-sync songs with a lot of U.P. folk that exists deep within my system a (as I hail from Amethi) in Jai Gangaajal. The music is by Salim-Sulaiman. Then there is Akira directed by A.R. Murugadoss, which has music by Vishal-Shekhar."

Manoj will kick-start his 2016 innings with-besides Wazir-Mastizaade and T-Series' Sanam Re. He admits that most listeners today "have the attention span of a goldfish" to a song, and therefore barely notice the words. "This reduces the longevity of a lyricist sometimes; however, though I may write a song functionally on a rare occasion, being essentially a poet, I would like to give each song of mine a personality and my fragrance. And that helps in the long run."

This, he clarifies, does not mean that he will have constraints in the kind of songs he writes. "I love to write to a situation," he says. "But I would like to write funky songs as well, not just serious or deep ones, and not judge whatever is happening in music today. For most, making music today is about feeling comfortable about what one is doing, and with whom."

And yes, the poet in him will be on full display when he releases his first book soon with Rajkamal Publications. Manoj Muntashir is here to stay.