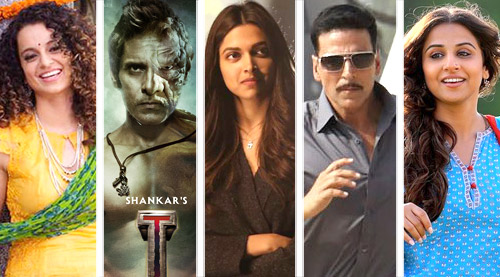 While the focus during the year was on the attention-grabbing characters, and performances to match, several A-list actors managed to create a space beyond that which was

10 Most rocking performances by a lead actor

provided by the script to create memorable characters. Here are 10 male and female lead performances that went beyond the requirements of the script.


1. Kangna Ranaut In Aanand L Rai's Tanu Weds Money Returns: Taking on a double role Kangna Ranaut created two distinct characters, not similar to one another in any detail. She was

spot-on with her Haryanvi dialect as the athletic Datto. Even the teeth of the two characters were different. This is one of the best dual roles ever attempted in a Hindi film, almost like two


2. Vikram in Shankar's I: Though this was a dubbed Tamil film, the take on The Beauty & The Beast saw a startling physical transformation in its lead actor. Vikram went from a

healthy love-struck Romeo to a sick dying deformed doomed victim right in front of our eyes. A performance so universal in its tragic resonances the spoken language ceased to matter.


3. Deepika Padukone in Imtiaz Ali's Tamasha: Playing a woman who can't get over a fling during a holiday Deepika brought into play a train of conflicting emotions as her character

realized that love can be quite a bitch. The sequence where she pretends to run into Ranbir Kapoor after several years of search was incredibly performed. Sheer mastery over the medium.


4. Akshay Kumar in Neeraj Pandey's Baby: Easily the show-stopper, Akshay was the epitome of bridled heroism as a counter-terrorist in a global pursuit of terror kingpins. The action

scenes were done with such subtle flair and the tenderness he brought to his scenes with his screen wife and daughter were proof of his magnificent maturation as an actor.


5. Vidya Balan in Hamari Adhuri Kahani: The film didn't work. But as a woman struggling to keep alive a dead marriage by stifling her feelings for another man, Vidya's performance was

a miracle of emotive abundance. Sometimes we forget to honour a performance just because we don't like the film that contains the performance. On the other hand we often praise everything blindly

6. Varun Dhawan in Sriram Raghavan's Badlapur: For a boy-man who has lived a sheltered life unexposed to any tragedy, to play a 40-year old suffering the murder of his family was no

small achievement. Quite a triumph, Varun. Take a bow.


7. Priyanka Chopra In Sanjay Leela Bhansali's Bajirao Mastani: She was not Mastani. But she was Bajirao's legally wedded wife bringing to her austere part a glory and strength that

went beyond what was prescribed by the script. After a hammy performance earlier during the year in Dil Dhadakne Do Priyanka redeemed herself with this one.


8. Ayushman Khurrana in Sharat Katariya's Dum Lagake Haisha: He fitted into his character of the pitiable Mr Nobody so effectively one couldn't see Ayushmann on screen. One only saw

Prem the surly Kumar Sanu fan who is so unhappy with life that he takes it out on his wife.


9. Anushka Sharma In Navdeep Singh's NH10: She was actually the hero of this brutal vendetta tale. Dragging her husband's killers out of their lair Anushka did a Salman Khan/Akshay