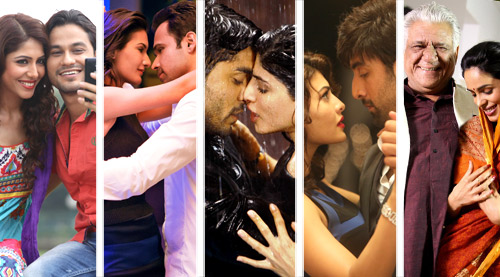 There are masterpieces of the year. Then there are the monster-pieces. Beyond these are the baffling oddballs, the ones you wonder why they ever got made and if they did, how did they get past all the check posts before getting into the theatres?? Listing the 10 most curious films of the year.

1. Guddu Ka Gun: This one deserves the Oscar for audacity. It's about Kunal Khemu's reproductive organ--or, gun--turning into gold. What follows is more bizarre than bold. Full-on ovation for the guy who thought up this idea. I'd have just liked to see Khemu's face when the subject was narrated to him.

2. Mr X: Ahem. Mahesh Bhatt sang the title song. Mr Bhatt's protege Emraan Hashmi played an invisible man, a Mr India without a sense of humour. The good thing is, we hardly saw much of Hashmi on screen. But the bad thing was that whatever we saw we could barely endure.

3. Khamoshiyan: Sapna Pabbi played a woman in a lonely guest house on a hill station torn between two men. One of the men played by debutant Gurmeet Choudhary was a corpse. This was necrophilia masquerading as a musical melodrama. Pabbi, by the way, played Anil Kapoor's daughter in the serial 24. Poor thing. How was she to know that after the ageless Anil she would go the morgue way?

4. Roy: Get this. Ranbir Kapoor's character didn't really exist in this film. To make up for the loss, there were two Jacqueline Fernandes whom you could tell apart from the shades of lipstick that she wore for the two characters. Arjun Rampal played a writer who insists on using a typewriter. This was film that even the debutant director Vikramjit Roy didn't follow. Scriptwriters? Come forward. Admit, you pulled a fast ones.

5. Dirty Politics: Mallika Sherawat in saree trying to seduce neta Om Puri with ma-bahen ki gaalis and some good old sex. It was a sight meant to make our stomachs churns. There ought to be a special censor certificate for films about smutty female politicians (like Kundan Shah's P Se PM Tak). This film wiped out Sherawat's career as a Bollywood actress.

7. Hunterr: Gulshan Deviah played a nymphomaniac with the wrong sex organ, a guy who thinks with his penis. Over-sexed and under-nourished he seduces frustrated aunties and insatiable bahenjis and doesn't mind getting beaten up by guys who have more to do in life than have sex with every moving object in a dress.

8. Dharam Sankat: Taking up a communal issue in a satirical way, and signing up stalwarts like Naseeruddin Shah, Paresh Rawail and Annu Kapoor to play religious zealots, doesn't necessarily mean you're making a social statement. You could just be wasting everyone's time, as this film did.

9. All Is Well: OMG! Did Umesh Shukla who earlier directed the iconoclastic irreverent tongue in cheek Oh My God actually assemble this worthless mirthless mess of a comedy? Wasting talent like Rishi Kapoor and Supriya Pathak is unforgivable. The one that got away was our Education minister Smriti Irani who had to give up the role because the country called. Modi's operandi, I say.

10. Alone: Bipasha Basu played Siamese twins, and both the Bipashas loved Karan Singh Grover. No wonder Neena Gupta had no dialogues to speak. This film left us all speechless. If the horror genre continues to be so amateurish we may soon have comedy films being labelled horror, and vice versa.