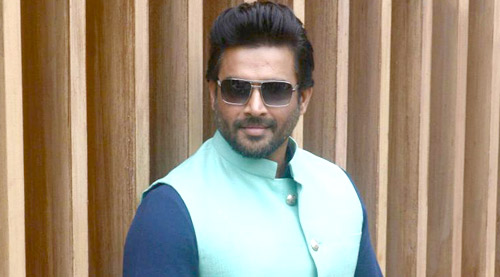 It was exactly 15 years back when Madhavan made his big screen debut with Mani Rathnam's Alai Payuthey (which was later remade into Saathiya). In the current

anniversary year, he also delivered an All Time Blockbuster in the form of Aanand L Rai's Tanu Weds Manu Returns. Being in the thick of things while gearing to release Saala Khadoos

(which is produced by Rajkumar Hirani), Maddy (as he is fondly called) looks back at his last 15 years with quite some love and affection.

Yes, indeed. I had entered the industry at the time when senior directors were at their best and younger ones hadn't come in. Back then, Mr. Subhash Ghai and K. Balanchander were at the top of the

game. This is when I realized that I had to wait for the change of guard if I had to continue to make my kind of films. After my first film with Mr. Mani Rathnam, I started working with absolutely

new and fresh guys. The first guy who came in was Gautham Menon. He hadn't made any film but I saw his potential. He was introduced by me with Minnale which was followed by Rehnaa Hai Terre Dil

Ever since then, you have done quite a few Hindi films but still remain much in circulation.

Yes. If you look at it then in the last 15 years I have done only 11 Hindi films, last being Tanu Weds Manu Returns. I started off as a lover boy and though Rehnaa Hai Terre Dil Mein

may not be a theatrical hit, even today the character Maddy is remembered, the songs are hugely popular and of course the film is a hit on satellite. I truly believe that it is not the quantity of

work but the quality of work which is more important. I was in the cusp of generations but fortunately am still around.

Quite a journey this has been, right?

Well, the decision was not to slow down but make a ground for myself so that people say - 'Maddy makes interesting films all the time'. 15 years down the line, I am happy. In the last three years

though I took a break of sorts. In retrospection, I feel I had become mundane and boring in my acting. I was resorting to certain set acting methods. I took some time off and as a result came back

refreshed. Now that would be seen in Saala Khadoos as well since I learnt new things. It is shot separately in Tamil and Hindi. Both the films have a different cast and I have to effectively

Yes, talking about Saala Khadoos, guess there is good feedback already pouring in. People were really waiting for it ever since the teaser was released a year ago with PK.

Our plan was very clear that the teaser had to be much before the release. See, after knowing that Tanu Weds Manu Returns was coming earlier, there was no point in going ahead and releasing

it first. That would have resulted in a conflict of characterization. In fact some people were saying that it would be a good idea to release the whole promo with Tanu Weds Manu Returns.

However, that would have looked like showcasing of my talent, so I was the first person to put my foot down. Why to confuse audience? Now that we releasing it in January, the promotion is in full

swing and I am glad that the reactions so far have been very positive.

So how did Saala Khadoos happen?

I made Raju [Raj Kumar Hirani] hear the story and narrated the entire screenplay. After that whatever happened was his professional decision. Yes, we being good friends could have played some part

in his decision making but I had done anything to embarrass him (smiles).