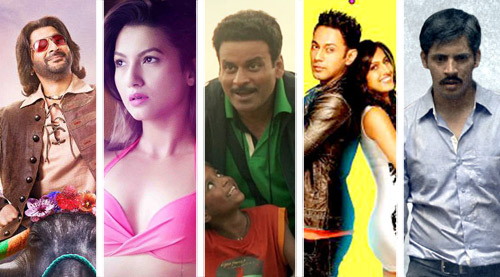 As many as five films are up for release tomorrow. These are The Legend of Michael Mishra, Fever, Budhia Singh - Born To Run, Hai Apna Dil Toh Awara and Moods of Crime. Ironically, most of these are delayed releases and are now finally hitting the screens.

Amongst these films, The Legend of Michael Mishra has some sort of a star power, what with Arshad Warsi, Aditi Rao Hydari and Boman Irani coming together. However, the promotion has been very patchy and there hasn't been much of a follow through after the reasonably decent promo. Fever boasted of an interesting promo and with Rajeev Khandelwal in there, the film's promotion has seen some push in the last fortnight. Considering the fact that Rajeev has done a few interesting thrillers, Fever - with Gauahar Khan - could spring a pleasant surprise.

Budhia Singh - Born To Run is a biopic about a child marathon runner with Manoj Bajpayee playing the coach. The film was launched more than a year and a half back and is releasing without much of a promotion. Hai Apna Dil Toh Awara is a romcom which is coming unannounced. Moods of Crime has virtually zilch publicity going for it.

All of this means that The Legend of Michael Mishra would lead amongst Hindi films when it comes to the screen count. In fact Dishoom would still have most of the screens reserved for itself even in the second week. It won't be surprising if the John Abraham-Varun Dhawan-Jacqueline Fernandez starrer manages to score more than the combined collections of all new Hindi releases