One of the most aniticipated films of the year is Ranbir Kapoor starrer Sanju. The film has garnered immense attraction from the audience as Ranbir has an uncanny resemblance to Sanjay Dutt. The film plans to show his childhood, life of being a star kid, drug phases, relationships and the legal hassles with 1993 blasts. With a biopic which is gaining attention every single day, it has now come under trouble over a scene. 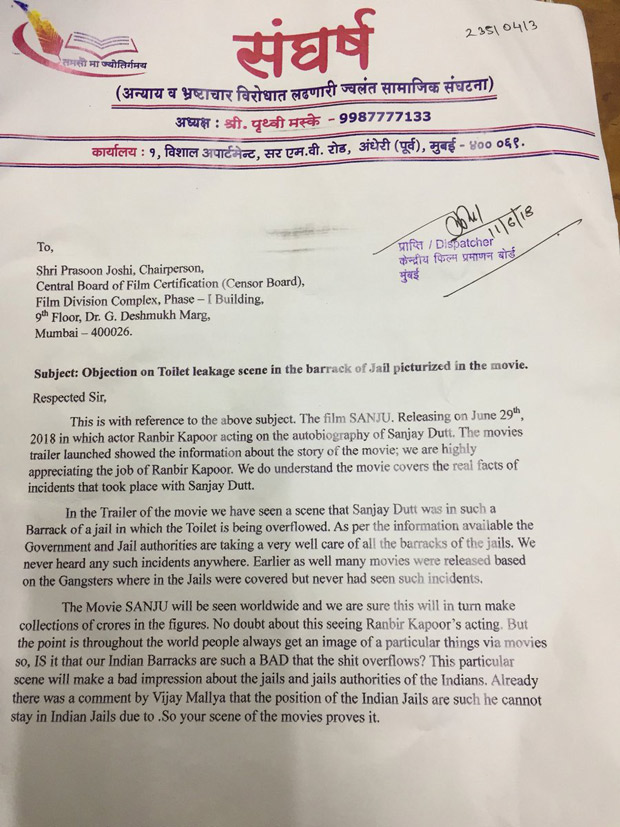 According to the latest reports, a complaint has been filed against Rajkumar Hirani's film Sanju with the Central Board of Film Certification over the toilet leakage scene which is shown in the trailer. The complainant Prithvi Mhaske of Sangharsh Foundation claims that this scene will make show the jail authorities in the bad light. The letter, which is addressed to Prasoon Joshi (CBFC Chairman), Ranbir Kapoor and Rajkumar Hirani, states, "In the trailer of the movie we have seen a scene that Sanjay Dutt was in such a barrack of a jail in which the toilet overflowed. As per the information available, the government and jail authorities are taking a very well care of all the barracks of the jails. We never heard any such incidents anywhere. Earlier as well many movies were released based on the gangsters wherein the jails were covered but never had seen such incidents.”

“This particular scene will make a bad impression about the jails and jails authorities of the Indians (sic),” it added. “If there is no action about the same by you then we are left with no option to approach the honourable court to put stay on the release of the movie (sic),” the letter concluded. 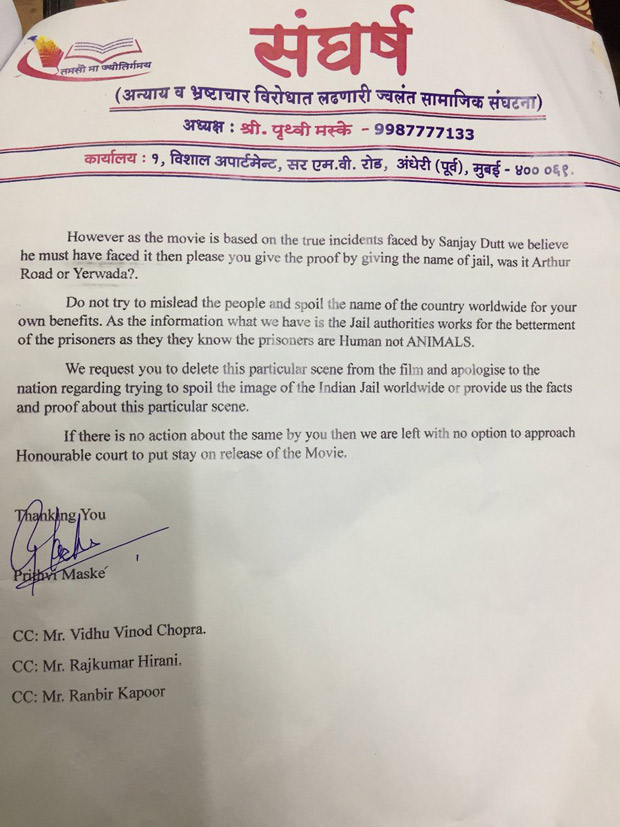 Written and directed by Rajkumar Hirani, the film will also star an ensemble cast in addition to Ranbir Kapoor which includes Paresh Rawal, Manisha Koirala, Vicky Kaushal, Sonam Kapoor and Dia Mirza amongst others. Produced by Vinod Chopra Films and Rajkumar Hirani Films in association with Fox Star Studios, Sanju is all set to be released on 29th June 2018.

Also Read : SANJU: This picture featuring Manisha Koirala and Nargis will give you goosebumps