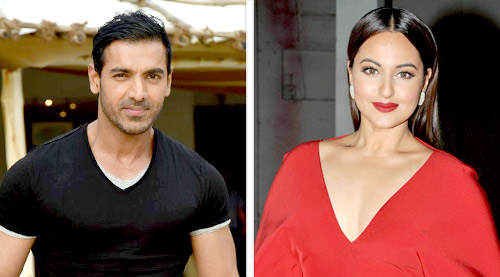 Earlier we have received a few glimpses of the Bangkok schedule of Force 2 as we saw the entire cast bonding and spending some fun time together. Now we hear that this last leg of shoot also included a romantic sequence between John Abraham and Sonakshi Sinha.

The two actors have been paired opposite each other for the first time and the song in question is titled 'Koi Ishara' composed by Amaal Malik. Revealing details about the track was filmmaker Abhinay Deo who not only mentioned about the film being a continuation but also stated that John is yet to come to terms with his wife's death (in the prequel) and the audience is left wondering if the complex relationship between John and Sonakshi will culminate into a romantic one. For the uninitiated, the role of John's wife in the first instalment was played by Genelia D'Souza. On the other hand, producer Vipul Shah also added that while one half of the song will be shot in Bangkok, there are on a hunt for a few new exotic locations to wrap up the second half of the song.