Bollywood actress Janhvi Kapoor, who was last seen in the 2022 movie Good Luck Jerry, will next star in the upcoming film Mili, a Hindi remake of the Malayalam film Helen. The upcoming thriller is bankrolled by her father, producer Boney Kapoor. The film also stars Manoj Pahwa and Sunny Kaushal. 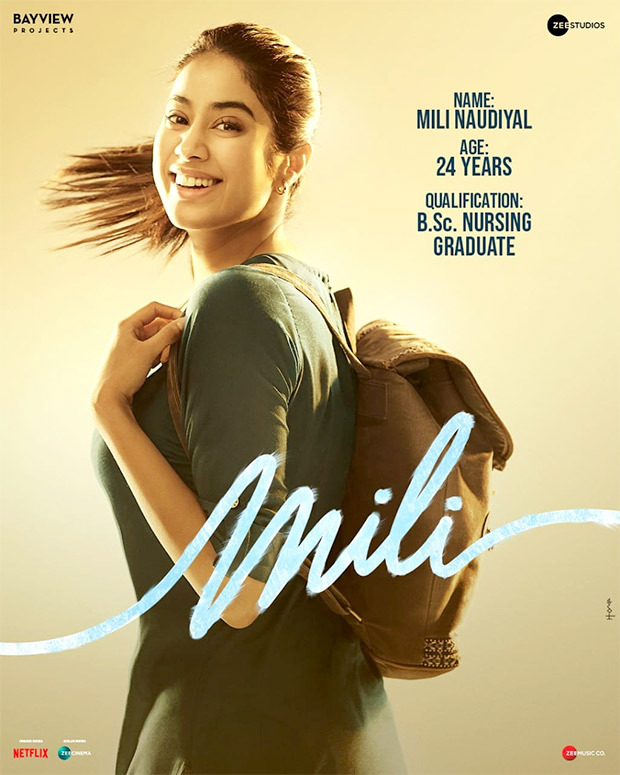 The first poster was unveiled on Wednesday by Janhvi Kapoor. Flaunting a wide smile, she is sporting a ponytail as she looks into the camera. She is donning a green kurta, and carrying a backpack. Along with the first look, she wrote, “In 1 hour her life is going to change… #Mili.” The poster reads her character name Mili Naudiyal who is 24 years old and is a BSC Nursing graduate.

The film's teaser looks gripping and intriguing and showcases a glimpse of a breathtaking sequence of Janhvi Kapoor's serious character play. Capturing a struggling Janhvi amidst a freezing ambience, the teaser aptly lets us a peek into the film's thrilling storyline. Producer Boney Kapoor has managed a casting coup with his & Zee Studios' next production, Mili, featuring his daughter for the first time!

Mili is being produced by Zee Studios and Boney Kapoor. It is directed by Mathukutty Xavier who directed the original film. Veteran actor Manoj Pahwa will essay the role of Janhvi Kapoor's father in the upcoming survival thriller. Produced by Zee Studios, Mili is scheduled to release in cinemas on 4th November 2022.

Meanwhile, Janhvi Kapoor will next star in Mr. and Mrs. Mahi starring alongside Roohi co-star Rajkummar Rao and Bawaal with Varun Dhawan. Both projects are scheduled for release in 2023.