Last Updated 14.08.2022 | 11:30 PM IST
feedback language
follow us on
Bollywood Hungama » Movies » Movie Reviews » Tumbbad Movie Review: Tumbbad rests on a unique concept but the disjointed narrative spoils the show. It’ll be a challenge for this film to impress the masses

Tumbbad Movie Review: Tumbbad rests on a unique concept but the disjointed narrative spoils the show. It’ll be a challenge for this film to impress the masses.

We have lagged behind considerably in the horror genre with only a handful of films succeeding in impressing the audiences. A sub category in horror genre is that of period horror. Here, only Vikram Bhatt has made a mark with 1920 [2008] and HAUNTED 3D [2011]. The rest of the films in 1920 franchise and 1921 [2018] failed to live upto the expectations. Now, Anand Gandhi and Sohum Shah, known for making the critically acclaimed SHIP OF THESEUS [2013], return with a scarefest, TUMBBAD, based in the pre-Independence era. So does TUMBBAD manage to send a chill down the audiences’ spine? Or does it fail? Let’s analyse. 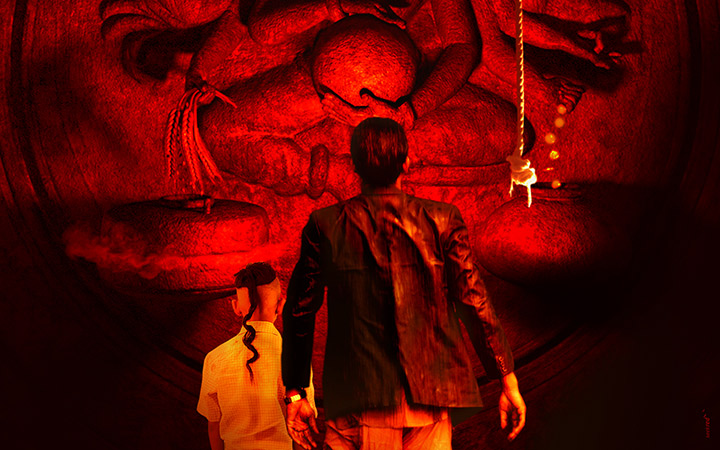 TUMBBAD is the story of a man who gets access to unlimited gold thanks to the curse of a goddess. When the Universe was created, the Goddess of Prosperity, the symbol of unlimited food and gold, gave birth to 16 crore gods and goddesses. The Goddess however loved her first child the most – Hastar. But Hastar wanted all the food and gold possessed by the Goddess. He managed to get access to her gold but when he came to get hold of the food, the fellow Gods and Goddesses attacked him. Before he could get completely destroyed, the Goddess of Prosperity saved him by keeping him in his womb but on one condition – no one should ever worship him and that he should be forgotten. Many centuries later, the residents of Tumbbad village however made a shrine in honour of Hastar, turning this village into a curse. It became a village where it rains perennially. The story begins in 1918. A teenaged Vinayak, his younger brother Sada and their mother reside in this village. The mother is a mistress of the village Sarkar who stays in the ‘wada’ (estate) where the Hastar’s temple is situated. Vinayak and Sada are the illegitimate children of Vinayak and Sada. The Sarkar has tried to find the treasure possessed by Hastar but his search turned futile and he managed to find just one gold coin. The Sarkar’s mother is a wretched old lady who refuses to die and Vinayak’s mother takes care of him. The Sarkar dies and the next day, Sada falls from a tree and also passes away. The mother gets hold of the gold coin from the shrine and leaves Tumbbad permanently with Vinayak. 15 years later, in 1933, Vinayak (Sohum Shah) goes back to Tumbbad in the hope of finding the lost treasure. Luck smiles on Vinayak as he’s able to find a way that leads him to unlimited gold coins. But he gets hold of only certain coins at a time. Vinayak exchanges these coins with a local moneylender Raghav who grows suspicious of Vinayak and the way he regularly gets hold of the coins. Unable to control his curiosity and desperate to earn some quick buck for getting license from his opium business, Raghav goes to the estate to get hold of some gold coins. What happens next forms the rest of the story.

Rahi Anil Barve’s direction is a bit weak as he too fails to do justice to the plot in hand. One of the biggest problems with the direction is certain things never get explained properly. For instance, who was the first one to remember Hastar and how did that person come to know about him, especially when he’s never mentioned in the scriptures anywhere? How come the Sarkar was never able to find gold coins in abundance, like Vinayak? The climax does grab your attention but again, a question arises why exactly such a twist occurs in the first place.

TUMBBAD’s first few minutes should not be missed at any cost. The entire legend of the village and Hastar is explained here and missing this bit would prove detrimental. The film is divided into three chapters. The first chapter, involving Vinayak’s childhood, is disturbing and needlessly gory. It doesn’t really engage well. The second chapter is slightly better, though a lot is still left to be desired. The intermission point is well shot and it’s from the second half that the film begins to get clearer. The scene in the womb immediately after the commencement of the second half leaves a mark. The third chapter has interesting developments, especially in the finale. But the way the makers don’t answer certain questions again hampers the impact.

Sohum Shah however delivers a fabulous performance. His deadpan expressions, dialogue delivery and eyes create an impact and works very well for this role. Anita Date (Vinayak’s wife) is quite good and makes a mark in few scenes. Ronjini Chakraborty (Vinayak’s mistress) gives a nice performance, especially in the scene where she meets Vinayak’s son. Mohd Samad (Vinayak’s son) is quite great and dominates a major chunk of the second half. Jyoti Malshe (Vinayak’s grandmother) is fine and her make-up itself is sure to scare a lot of viewers. Cameron Anderson (Sergeant Cooper) and the actors playing Hastar, Vinayak’s mother, younger Vinayak, Raghav are good.

Ajay-Atul’s music is nothing special and there’s just one song – the title song – played at various junctures in the film. Jesper Kyd’s background score however is brilliant and has an international feel. Pankaj Kumar’s cinematography is spectacular and one of the best of the year. The virgin locales of Maharashtra are very well captured. Filmgate Films AB’s VFX is quite good and doesn’t give any reason to complain. Nitin Zihani Choudhury and Rakesh Yadav’s production design is praiseworthy, especially in the scenes of the womb. Smriti Chauhan and Sachin Lovalekar’s costumes are reminiscent of the bygone era. Serina Mendonca Texeira and Shrikant Desai’s make up and Dirty Hands and Studio Hash’s prosthetics is something to watch out for. Parvez Shaikh’s action is decent while Sanyukta Kaza’s editing is smooth.

On the whole, TUMBBAD rests on a unique concept but the disjointed narrative spoils the show. It’ll be a challenge for this film to impress the masses and hence struggle to do good business at the box office.

Sohum Shah intends to make a prequel or sequel to Tumbbad

If you really crave for good art then Tumbbad is best made for you, It easily occupied best movie…