Last Updated 27.05.2022 | 11:00 PM IST
feedback language
follow us on
Bollywood Hungama » Movies » Movie Reviews » Manto Movie Review: Nawazuddin Siddiqui's Manto has its moments and makes an important comment which is relevant in today’s times. However, the second half is weak and the film overall is too niche.

Manto Movie Review: Nawazuddin Siddiqui's Manto has its moments and makes an important comment which is relevant in today’s times. However, the second half is weak and the film overall is too niche.

Is freedom of expression absolute? What constitutes obscenity and indecency? These are the questions our present-day Indian society is grappling with especially when artistes sometimes try to push the envelope. This is unfortunate, considering our history is replete with some very progressive artists who set the benchmark for progressiveness and yet, our society moved forward. Saadat Hasan Manto was one such writer and his works continue to fascinate readers even today. Nandita Das, after years of struggle, is finally ready with her film on this personality, titled MANTO. So does MANTO manage to stir and move viewers just like the writer’s works? Or does it fail in its endeavour? Let’s analyse. 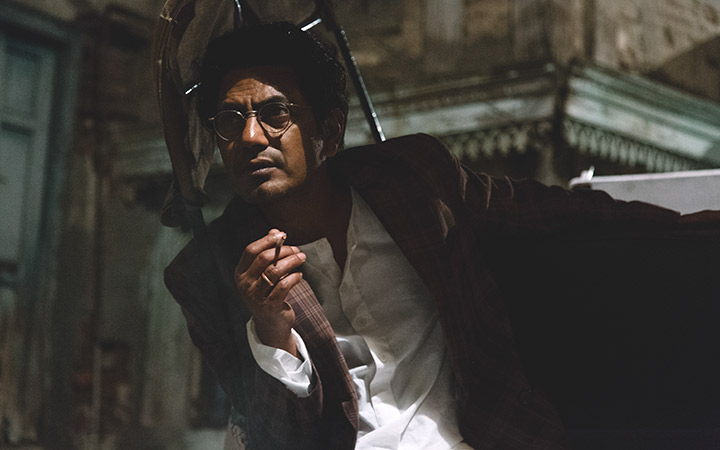 MANTO throws light on the four decisive years of the life of Saadat Hasan Manto (Nawazuddin Siddiqui), a rebellious writer. The story begins in 1946 in Bombay, India. Manto is a non-practicing Muslim but has his apprehensions when the communal riots break out at a time when the country is at the cusp of freedom. He is married to Safia (Rasika Dugal) and he earns his living by writing for films. His close friends are fellow liberal writer Ismat Chugtai (Rajshri Deshpande) and film actor Shyam Chadda (Tahir Raj Bhasin). Meanwhile, India gains Independence on August 15, 1947. Saifa goes to Lahore to attend her sister’s wedding. Manto meets Shyam’s family who have run from Rawalpindi to India and have lost a family member while escaping. Shyam, in a fit of rage, expresses his hatred for Muslims and even tells Manto that he could have killed him too. A distraught Manto decides to leave India permanently and settle in Lahore. There, he is slapped with obscenity charges over his story ‘Thanda Gosht’. What happens next forms the rest of the film.

Nandita Das’s story is interesting as it doesn’t throw light on Manto’s entire life but only on the four years. It also makes a nice comment on the idea of freedom of expression and how society continues to create problems for those who are showing the mirror. Nandita Das’s screenplay has its moments with few scenes being exceptionally written. However, at a lot of places, the film fails to make the desired impact which is unfortunate since the film has a lot of potential. Nandita Das’s dialogues are sharp and acidic. Manto’s original quotes are also used and it adds an authentic touch. However, a lot of dialogues are in chaste Urdu and English subtitles thankfully have been provided.

Nandita’s direction is unhurried and breezy. The subject reminds one of Ketan Mehta’s RANG RASIYA [2014], which also spoke of an artist being dragged to court over a frivolous issue, and the acclaimed Spanish film NERUDA [2016], based on the Chilean poet Pablo Neruda. But Nandita with her execution ensures that viewers don’t start drawing parallels with these two films. Special mention should be made of two aspects – one, she doesn’t get overwhelmed with the period setup and doesn’t try to focus more on the sets and props. She instead keeps her focus on her protagonist. Secondly, she handles few sensitive factors with panache, one of them being Manto’s friendship with Ismat. The manner in which their pure friendship is depicted with Manto’s wife also acknowledging it makes for a nice watch. But on the other hand, she makes the film too dry, especially in the second half. This heavily mars the impact.

MANTO is just 112 minutes long but could have been tighter, like Nandita Das’s previous directorial venture FIRAAQ [2009]. The characters are well established and the manner in which Manto’s stories are interspersed with the narrative smoothly is praiseworthy. The first half is shorter and has some memorable sequences – Manto getting livid with the producer (Rishi Kapoor), Manto and Safia trying to imagine the back story of a woman they see in a park and Manto and Safia witnessing the Independence Day celebrations. The best sequence of the first half however has to be Manto and Shyam’s confrontation in the local train. The second half is longer and this is where the film slips. Manto’s struggles could have been showed in a better manner. Also, the film has some great characters but barring 2 or 3, the rest don’t get their due like the lecherous film producer (Rishi Kapoor), Shaad Amritsari (Shashank Arora), Jaddan bai (Ila Arun), Nargis (Feryna Wazheir), Tea Stall Man (Neeraj Kabi), Ansar Shabnam Dil (Vijay Varma), Abid Ali Abid (Javed Akhtar) etc. The climax is symbolic but looks a bit abrupt. As a result, MANTO will appeal only to the high-end multiplex audiences.

Nawazuddin Siddiqui is the soul of MANTO and succeeds in giving a yet another memorable performance. The actor breathes life into the character and does justice as he portrays his various sides. One of the most underrated aspects of his performance is when he feels fearful (notice him in the scene with Ashok Kumar). Rasika Dugal has a crucial part and plays her part with aplomb. Tahir Raj Bhasin delivers a bravura performance. In the second half, his screen time is limited and although he does well, the happenings in the said sequence seem superficial. Rajshri Deshpande is terrific in a cameo and one wishes she had a longer role. Rishi Kapoor is good as the sleazy filmmaker. Shashank Arora has an important part but no explanation is given as to who exactly is he and how a bond is formed between him and Manto. Ila Arun gets to shine in the scene where she sings the song. Neeraj Kabi is as always exceptional but again, has hardly anything to do. Vijay Varma, mostly remembered as the antagonist in PINK, is decent. Javed Akhtar is impressive, giving one a déjà vu of Naseeruddin Shah’s cameo in the Pakistani film KHUDA KAY LIYE [2007]. Inammulhaq (Hamid) and Chandan Roy Sanyal (Ahmed Nadeem Qasmi) are okay and don’t get much scope. Feryna Wazheir gets no dialogue although she quite looks the part. The actor who played Ashok Kumar is a bit over the top but manages to get the nuances right.

Then there are actors who play the characters of Manto’s stories. Out of these, Ranvir Shorey (Ishrat Singh) and Divya Dutta (Kulwant Kaur) get the maximum scope and create a tremendous impact. This is followed by Vinod Nagpal (Bishan Singh; Sikh man in Toba Tek Singh). Paresh Rawal (Pimp), Tillotama Shome (Prostitute), Gurdas Maan (Sirajuddin) and Purab Kohli (Kaifiyat) also do very well.

Sneha Khanwalkar's music doesn’t get much scope. ‘Nagri Nagri’ gets registered as it’s played at an important part. ‘Bol Ke Lab Azaad Hain’ comes during the end credits. The rap song ‘Mantoiyat’ thankfully is not made a part of the film. Zakir Hussain's background score is subtle and impactful. Kartik Vijay's cinematography is neat. Rita Ghosh's production design, Sheetal Iqbal Sharma's costumes and Shrikant Desai's hair and make-up are too good and play an important role in giving the film a realistic, authentic touch. Prana Studios's VFX matches the global standards. All these come together very well in recreating the bygone era. A Sreekar Prasad's editing is simple.

On the whole, MANTO has its moments and makes an important comment which is relevant in today’s times. However, the second half is weak and the film overall is too niche. Hence, it won’t appeal to the mainstream audience and this would affect its box office performance.

3 Years of Manto: “Working with Nawazuddin Siddiqui on Manto was a live masterclass” - Tahir Raj Bhasin

Nandita Das takes Manto to youngsters in Oxford, shows the film to Malala

I don't know who reviewed it from Bollywood Hungama, but this movie is contextual and a good movie.…