Director Anurag Basu’s previous film JAGGA JASOOS [2017] didn’t impress the audiences and was also criticized for going overbudget and for being in production for nearly 3-4 years. However, Bollywood didn’t lose trust in him thanks to his good-hearted nature and also because his overall track record has been great. He has helmed some of the most significant films in last 20 years like MURDER [2004], GANGSTER [2006], LIFE IN A METRO [2007] and BARFI [2012]. Hence, it’s no wonder that he got an ensemble cast in place for his next, LUDO. It was unofficially referred to as LIFE IN A METRO 2 as just like the 2007 flick, this film also features multiple stories which are connected to each other in some manner. However, while LIFE IN A METRO was a slice of life fare, the trailer of LUDO indicates that it’s in a wacky, crime comedy space. So does LUDO manage to entertain and enthral viewers? Or does it fail to entice? Let’s analyse.

LUDO is the story of quirky characters and how their life gets interlinked in a series of bizarre circumstances. Alok Kumar Gupta aka Aalu (Rajkummar Rao) loves Pinky (Fatima Sana Shaikh) like crazy since childhood. Sadly for him, Pinky ditches him and marries Manohar Jain (Paritosh Tripathi). It’s been three years since she’s hitched and she even has a son. Yet, Aalu continues to love her. Pinky, however, is not happy with Manohar. She gets suspicious that he’s having an affair. However, he lies to her by saying that he goes out to meet his friend, Bhinder (Saurabh Sharma). One day, she follows him. He realizes he’s being followed and hence has no choice but to drive to Bhinder’s villa. Pinky realizes that Manohar isn’t lying and leaves. Manohar then goes to meet his girlfriend, Sambhavi (Geetanjali Mishra). Minutes after he leaves, Sattu (Pankaj Tripathi), a dreaded gangster, arrives and kills Bhinder and his wife. Rahul Awasthi (Rohit Suresh Saraf), a sales executive in a hypermarket, who is kicked out of his house for non-payment of dues, happens to take refuge at the Bhinder villa at the same time. While leaving, Sattu takes him hostage to his sprawling hideout in the middle of a river. While he’s on his way, he kidnaps a person named Bhanu (Bhanu Uday) hostage as he has failed to repay him Rs. 90 lakhs that he owed. He also tells Bhanu’s wife Asha (Asha Negi) that she should tell Bittu (Abhishek A Bachchan) to meet him. The next day, cops spot Manohar’s car in Bhinder villa and conclude that he’s the murderer. He’s arrested by inspector Sukumar Sinha (Ishtiyak Arif Khan). Pinky ruins it by telling the cops that she saw Manohar entering the villa. Manohar, however, tells her at this point that he was with Sambhavi. He pleads her to meet Sambhavi and confess to the cops the truth and only then he’ll be able to get out of custody. Sambhavi, however, refuses to even admit that she has even met Manohar ever. With no other option, Pinky approaches Aalu for help. On the other hand, Asha meets Bittu. Bittu and Asha were married at one point and even have a daughter, Ruhi. Bittu used to work for Sattu but after he fell in love with Asha, he quit. Sattu didn’t like it and he got Bittu arrested. Asha then married Bhanu and became the father of Ruhi. On Asha’s request, Bittu goes to Sattu’s hideout. At this point, Akash Chauhan (Aditya Roy Kapur) comes to meet Sattu. Akash finds out that a porn clip featuring him and Shruti Choksi (Sanya Malhotra), with whom he had a fling once, is viral. He first approaches inspector Sukumar Sinha. But he tells her to bring Shruti to file the FIR. Shruti is getting married in five days to a wealthy chap named Shekhar (Aman Bhagat) and when he meets her and tells the truth, she is livid. Hence, he approaches Sattu. Sattu assures him that his work will be done. As Akash leaves and Bittu enters, a loud explosion takes place there because of Rahul, who had gone to the kitchen to prepare tea and left the gas on. Akash and Bittu escape with minor injuries but Sattu gets grievously hurt. Yet, Sattu manages to take a nurse, Sheeja Thomas (Pearle Maaney) and Rahul hostage. What happens next forms the rest of the film.

Anurag Basu's story is promising and sounds fantastic on paper. Anurag Basu's screenplay tries to do justice but succeeds only in parts. There’s no doubt that a lot of hard work has gone in connecting the dots and in ensuring the various parallel stories converge at interesting points in the narrative. While a few of them arrest attention, there are several such intersections which seem to have been done just for the heck of it. Samrat Chakraborty's dialogues are well worded and add to the humour and drama.

Anurag Basu's direction is decent. He tries his best to ensure the film stands out not just with the script but also by filling the narrative with some creatively executed scenes. The manner in which he takes his time to establish the characters and then inform viewers how they are related to each other is smartly done. On the flip side, this also gets a bit too much after a point. Also, in order to be unpredictable and quirky, the director takes a lot of cinematic liberties. The manner in which Aalu especially manages to commit crime after crime, to the extent of even killing cops, and he never gets nabbed is too hard to believe. The same kind of unconvincing moments are also a part of the other stories. Moreover, a few stories don’t work individually, and that further mars the impact.

LUDO begins in an interesting manner as all the main characters are presented by two mysterious, Ludo-loving men. It takes a while to comprehend how each of them are related to each other and it becomes clear as the film progresses. Sadly, not all tracks work equally. The Aditya Roy Kapur-Sanya Malhotra track is the most interesting. The circumstances which compel them to be together and their conversations make for an interesting watch. The Abhishek Bachchan track is the weakest of all and simply doesn’t work. The Pankaj Tripathi story commences on a rocking note. But it loses steam once he gets admitted into the hospital. Also, the way he manages to escape death everytime is too hard to digest, even in a quirky film like this. The Rajkummar Rao-Fatima Sana Shaikh track has its share of interesting moments but is also unconvincing. Rajkummar’s sacrificial nature should have ideally made us teary-eyed but that doesn’t happen. Lastly, the Rohit Suresh Saraf- Pearle Maaney story is bland, except for some occasional quirky moments. 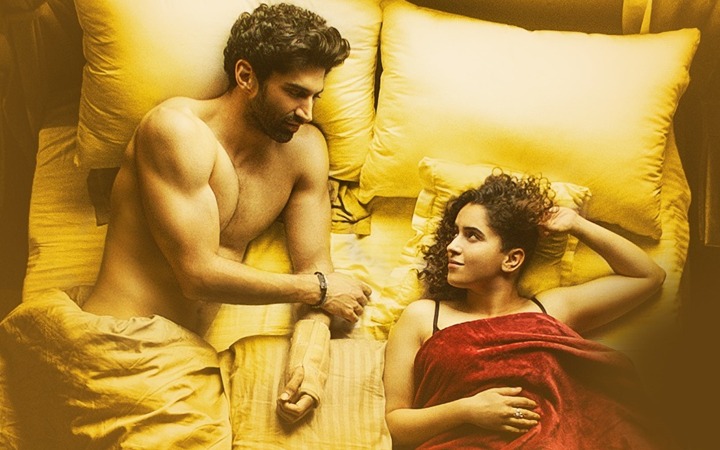 Abhishek A Bachchan is not in complete form. The scenes of him losing his temper don’t seem convincing; he did a similar act in a much better way in YUVA [2004]. Later on, his performance however gets better but is still let down by the script. Aditya Roy Kapur is apt for the part. His laidback persona works for this role. Rajkummar Rao (credited in the film as Raj Kumar Rao) tries his best to rise above the script. The manner in which he tells Pinky how he turned into a Mithun Chakraborty fan for her is cute. Pankaj Tripathi plays the kind of a role which he has played before in MIRZAPUR but here, his character has a quirk that makes his performance worthwhile. Also the use of the song 'O Beta Ji' for his scenes gives a nice touch. Sanya Malhotra is lovely as a practical girl who wants to settle with a rich guy. Fatima Sana Shaikh leaves a huge mark. Rohit Suresh Saraf hardly has any dialogues but one might not even realize this aspect. His screen presence is too good. Pearle Maaney makes an amazing Bollywood debut and looks ravishing in the second half. Ishtiyak Arif Khan tries too hard to be funny but doesn’t work. Child actor Inayat Verma (Mini) has a crucial part and delivers a splendid performance. Also, it’s after ages that we got a chance to see such a well-written role for a child actor. Shalini Vatsa (Latha Kutty) is a surprise of the film. Paritosh Tripathi gets to shine in the beginning and climax. Asha Negi and Bhanu Uday get limited scope. Saurabh Sharma, Bhanu Uday, Geetanjali Mishra, Aman Bhagat, Varun Verma (Mini's father), Mamta Verma (Mini's mother) and Rajiv Mishra (hotel receptionist) are decent. Shivaaji Satam reprises the role of a CID officer which he has played on TV but he has a blink-and-miss appearance. Lastly, Rahul Bagga (Chitragupt) and Anurag Basu (Yamraj) are entertaining.

Pritam's music isn’t of the chartbuster variety. 'Aabaad Barbaad' is the most memorable. The rest of the songs like 'Meri Tum Ho', 'Tere Sirhane', 'Dil Julaha' and 'Humdam' are poor. Pritam’s background score however is way better. Allan Amin's action is first-rate and is not too gory. Ashish Dawyer's costumes are realistic yet appealing. NY VFXWalla's VFX could have been better. Anurag Basu's production design is neat. The different episodes of the film are shot in different cities but set in one town. Yet, due care has been taken to ensure that all the locales look like they are situated in one place. Anurag Basu and Rajesh Shukla's cinematography also works well in this aspect. Ajay Sharma's editing is uncomplicated and the various tracks and stories are neatly woven into the narrative.

On the whole, LUDO is interesting and entertaining in parts and consists of unpredictable scenes and bravura performances. But due to a few poor tracks and unconvincing moments, the desired impact is not made. A marginal one time watch.

EXCLUSIVE: Pankaj Tripathi confessed that he was so overwhelmed at IIFA with the ovation that he received that he forgot to thank his team and his wife

IIFA 2022 Nominations: Shershaah takes the lead with 12 Nominations, Ludo and 83 emerge as strong contenders; check out the complete list

OTT round up of November: Fabulous Lives of Bollywood Wives appals, Laxmii tanks, The Crown Season 4 fascinates all

How much would have Sadak 2, Akshay Kumar's Laxmii, Khaali Peeli and Ludo earned at the box office? Trade gives its verdict