A film shot in a house replete with madcap characters is a great idea used very well in the past. Priyadarshan tickled the funny bone of audiences with GARAM MASALA [2005], which was majorly set in a luxurious flat. Later, all the films of the HOUSEFULL franchise also dealt with this scenario and audiences loved it. Now Govinda’s new film FRYDAY is also on the same lines and what’s more, it also features Varun Sharma. Both the actors are known for their excellent comic timing and can create riot if the film is laced with a well-written and funny script. So does FRYDAY manage to get things right? Or does it fail in its endeavour? Let’s analyse. 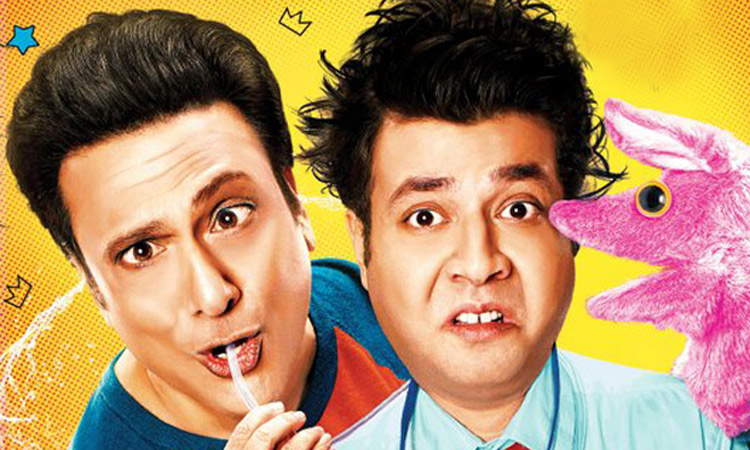 FRYDAY is the story of madness that unfolds in a house on a Friday. Rajiv Chhabra (Varun Sharma) works in a water purifier company called Pavitra Paani Purifier as a salesman. He hasn’t been able to complete his targets while his colleague Sameer (Meghvrat Singh) has been an overachiever. His boss gives him an ultimatum that he has to sell a water purifier by coming Friday or else he would lose his job. Rajiv meets a motivational talker Manchanda (Sanjay Mishra) who inspires him and also recommends that he install a water purifier in the residence of NGO worker Bela (Prabhleen Sandhu). Bela is married to Gagan Kapoor (Govinda), a theatre actor. Bela is so busy with her social work that she starts to ignore Gagan. A lonely Gagan hence starts an affair with Bindu (Digangana Suryavanshi), who is married to Inspector Ranpal Dahiya (Rajesh Sharma). Bela is to leave for Shimla on Friday for a day. Therefore, Gagan makes a plan and calls Bindu to his house. On the other hand, Bela talks to Rajiv and calls him to her house to install the water purifier on Friday. On Friday morning, Bela leaves for Shimla and soon Bindu arrives in the house. However their idea of spending time together is short-lived as Rajiv lands up there to get his work done. What happens next forms the rest of the film.

Rajiv Kaul’s story is simple and interesting. Rajiv Kaul and Manurishi Chadha’s screenplay turns the waferthin plot into an entertaining film. It flows very smoothly and does justice to the 113 minutes runtime of the film. Manurishi Chadha’s dialogues are one of the pillars of the film. The various one-liners are very funny and would bring the house down, especially in single screen cinemas.

Abhishek Dogra’s direction is quite nice and does justice to the script. The director has earlier directed DOLLY KI DOLI [2015] which was also a fun comic caper. But even that film fizzled towards the end and FRYDAY is no exception.

FRYDAY has a rocking beginning with the opening credits that mention Govinda as ‘Hero No 1’ and an exhilarating song 'Chotey Bade' is played. Rajiv’s introduction is nothing special. One wonders why he’s traveling by an expensive cab when he’s financially not secure. Gagan’s entry however is hilarious and it sets the mood of the film. Things really come on track once Bela leaves for Shimla and Bindu enters the residence. From here on, it’s a mad ride as strange characters ring the bell and disturb the lovers. The track of Chitchor (Brijendra Kala) and the manner in which Gagan allows him to loot his house with permission is hilarious. With Rajiv entering the mad house, things get even better and funnier. The intermission point comes at a crucial juncture although it reminds one of NO ENTRY [2005]. Post-intermission, the madness continues but after a point, it gets a bit diluted. A few sequences are funny, like Gagan making up stories about Bindu and Rajiv’s love affair when caught red-handed by Bela and also Ranpal’s scenes. But the climax leaves a lot to be desired and the film ends sans any high. One wishes the second half had more gags and funny situations especially when the setting and the characters had the potential.

Govinda is in top form after ages. His recent films like AA GAYA HERO [2017], KILL DIL [2014], NAUGHTY @ 40 [2011] etc. have been highly disappointing. But with FRYDAY, the veteran actor proves that he still has the ability to thoroughly entertain the viewers with his excellent comic timing. It’s a pleasure to see him going all out and giving the audiences complete entertainment.  Varun Sharma also does a very good job and he too manages to leave a huge mark. Also, he compliments Govinda very well. Digangana Suryavanshi looks cute and manages to give a decent performance. Prabhleen Sandhu has a good screen presence. Sanjay Mishra is impressive in a cameo. Brijendra Kala has a crucial role and gives a fine performance. His track however doesn’t end on a satisfactory note. Rajesh Sharma delivers a nice performance, especially in the climax. Ashmita Kaur Bakshi (Sonam) and Manoj Bakshi (Boss) are okay. Ishtiyak Khan (Sunny) contributes to the laughter while Meghvrat Singh gets to play a very interesting character.

There’s no scope for music as such in the film. 'Chotey Bade' is played in the beginning credits and works at that juncture. 'Jimmy Choo' and 'Kauva Party' are missing from the principle part of the film. Sanjay Chowdhury and Rooshin-Kaizad’s background score is quite filmy and dramatic. Manoj Shaw’s cinematography is okay. Shailesh Mahadik’s production design is very poor and the film doesn’t look rich. Tina Ahuja and Naahid Shah’s costumes are quite appealing. Manan Ajay Sagar’s editing could have been a bit slick, especially in the introduction scenes of Rajiv.

On the whole, FRYDAY is a decent funny entertainer that works despite glitches. Govinda is in superb form and he is sure to be loved by the audiences, especially in the single screen cinemas. But the absolute lack of buzz might go against the film at the box office.

Loved this movie .I’m a huge fan of Govinda & he acted so well.The movie was very interesting .…