Fraud Saiyaan Movie Review: Fraud Saiyaan starring Arshad Warsi is a delayed film that might not look old but in terms of thought, it definitely seems dated.

Four years ago, Sonam Kapoor surprised everyone with her comic caper DOLLY KI DOLI [2015]. It was a tale of a woman getting married and then running away with the money of the groom. Now in a gender reversal, Arshad Warsi attempts something similar in FRAUD SAIYAAN. This is a delayed film but fortunately for the makers, it doesn’t seem dated. So does FRAUD SAIYAAN turn out to be a fun-filled entertainer? Or does it disappoint? Let’s analyse. 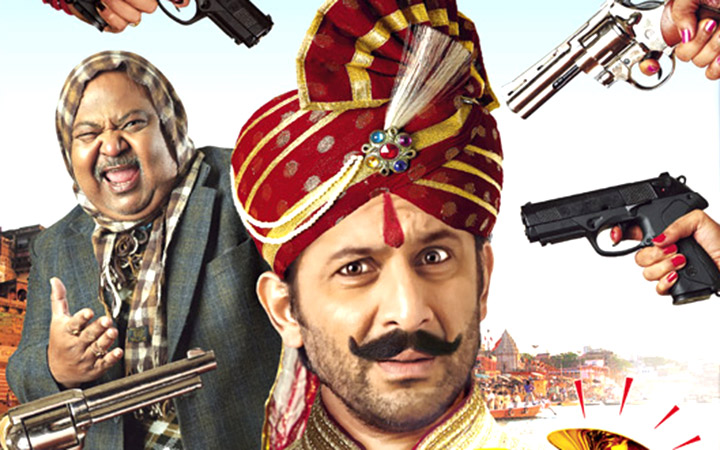 FRAUD SAIYAAN is the story of a guy who has multiple wives. Bhola Prasad Tripathi (Arshad Warsi) is a con man who gets married to women and then robs them of their money. He has got married to as many as 12 women and is searching for his next target. He is with his wife Sunita (Deepali Pansare) one day in Lucknow when she tells him to go to the station to fetch his uncle Murari Chaurasia (Saurabh Shukla). Murari however finds out the truth about Bhola. He tries to expose him but the effort proves futile. Then he pretends to be enamoured by Bhola and asks him to make him a part of the team. Bhola agrees reluctantly and Murari then gets a first-hand experience of how Bhola is handling so many wives and fooling them with ease. However both land in a soup as dacoit Chanda Yadav (Bhawana Pani) who was promised marriage by Bhola, abducts him and forces him to get married. What happens next forms the rest of the film.

Sourabh Shrivastava's story is interesting and does give a déjà vu of DOLLY KI DOLI and even Kapil Sharma's debut flick KIS KISKO PYAAR KAROON [2015]. There are some loose ends and on the screenplay level, it could have been taken care of. However, Amal Donwaar and Sharad Tripathi's screenplay makes no such attempt. Things happen quite conveniently in the film. One can excuse some of them since it’s one of those leave-your-brains-at-home kind of a film. But even then, there has to be some limit and the makers don’t adhere to it. For instance, Murari gets off on a desolate railway station which was not supposed to be his destination. And here, he finds an abandoned car with key in its ignition. Needless to say, he grabs it and keeps it with him till the very end! Amal Donwaar and Sharad Tripathi's dialogues however are quirky and help in bettering the impact. Sourabh Shrivastava's direction is average as the film is all over the place. Despite the short length, the film seems dragging. And the attempt to justify Bhola’s actions backfire badly.

FRAUD SAIYAAN is a delayed film and visually it might not look old but in terms of thought, it definitely seems dated. A film like this would have worked 4-5 years back. But in 2019, such a film seems regressive and objectionable. Some scenes however are interesting. The sequence of the cop chiding Murari brings the house down. Also a few scenes here and there of Bhola fooling his wives easily are funny. But an attempt is also made to force humour. The multiple instances of Murari farting bring the film down. Also, despite the short length of 1.52 hours, FRAUD SAIYAAN seems like a 2.30 hours affair. Thankfully the climax is a surprise and unexpected. That saves the film from becoming an ultimate disaster.

Arshad Warsi is in his element and his highly entertaining. He is apt for such roles and he ensures that viewers won’t have any complaints at least with his performance. Saurabh Shukla is also quite fun though he is let down by the script. Both Arshad and Saurabh make a great pair. Sara Loren (Payal) is hardly there initially but in the second half; she makes the most impact out of all the other actresses. Flora Saini (Shraddha) comes next. Elli AvrRam (Chandni) is decent. Her scene is an afterthought but is well woven in the film. It is however amusing to see that her character name is Chandni but she has a tattoo on her body that reads Elli AvrRam! Deepali Pansare is nothing great and same goes for Anangsha Biswas (Aastha). Bhawana Pani is funny. Nivedita Tiwari (Mala Dubey) is okay. Preeti Sood (Preeti) gets limited scope. Varun Badola (Badri) is fine. Piyush Suhane (Dulare) and Faizal Malik (cop) add to the fun.

Sohail Sen and Tanishk Bagchi's music is routine. 'Chamma Chamma' is the most memorable. Title song is catchy but not memorable. Sohail Sen's background score is quirky as per the mood of the film. Uday Prakash Singh's production design is fine. Prakash Kutty's cinematography is simple. Nirav Soni's editing is weak and few scenes could have been shorter.

On the whole, FRAUD SAIYAAN comes too late in the day and might have worked better a few years back. At the box office, the lack of buzz will affect its prospects.

HOT! These sensuous photos of Elli AvrRam from ‘Chamma Chamma’ will drive away your mid-week blues!