With so many superhero films releasing in a year, it often comes to feel like they all look the same. As Marvel continues to make more expensive and larger than life films, there comes Marvel's 18th superhero film, BLACK PANTHER. There arrives Ryan Coogler's sprawling saga which blends mythical tones with classic drama in the Marvel Cinematic Universe.

Black Panther was a character created by Stan Lee and Jack Kirby in 1966, the son of the king of the African nation Wakanda. The film opens with a monologue from King T'Chaka while he introduces his son T'Challa to the big world of Wakanda. Cut to the story about King T'Chaka's brother played by Sterling K Brown who betrayed Wakanda. The film finally begins with Wakanda in flux over the death of its leader during CAPTAIN AMERICA: CIVIL WAR. T'Challa (Chadwick Boseman) is ready to take the charge as the King but is struggling to be the voice of continuity. He's regal, gracious and well- mannered to take the charge. The story moves to another part of the world where the main antagonist Killmonger (Michael B Jordan) is prepping to take over Wakanda and it's leadership and plans to turn it into an interventionist world power. As seen in trailers, Killmonger also turns into gold plated Black Panther who is one man army hellbent to kill T'Challa. The story unfolds as the director begins to tell the story of leadership, loyalty and black power. 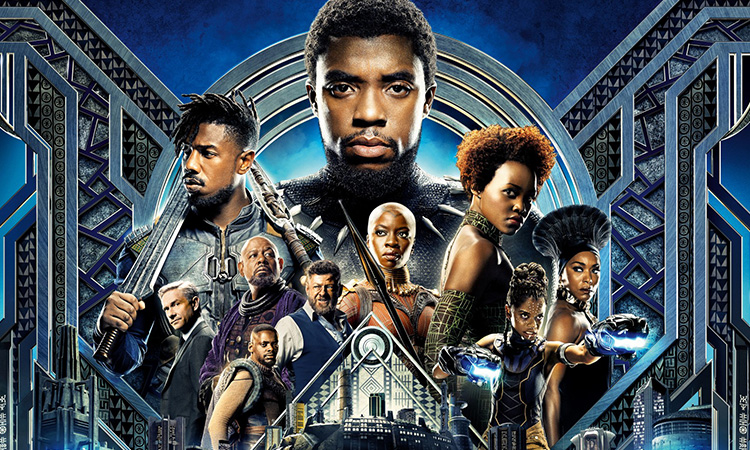 Chadwick Boseman, who plays Black Panther, was introduced back in 2016 in CAPTAIN AMERICA: CIVIL WAR. While the seed was planted earlier, his first appearance as Black Panther impressed the comic book fans. In 2018 film BLACK PANTHER, Chadwick Boseman brings gravitas to T’Challa’s struggle of becoming suddenly becoming a King from a Prince after his father's assassination. He brings charisma and charm to the table as he isn't just any superhero. He is a leading black superhero who makes the part his own.

Michael. B. Jordan, the main antagonist Killmonger, plays the classic comic book villain and exudes spellbinding performance. His character channels the childhood pain and faces of the Black Panther. His complex and nuanced character plays the central part in the film which absolutely grabs attention.

Academy Award winner Lupita Nyong’o essays the role of T’Challa’s ex Nakia who is one of the nation’s undercover war dogs helping the community in need. Letitia Wright essays the role of T’Challa’s super smart kid sister, Angela Bassett as T’Challa’s proud mother, to Daniel Kaluuya as a shifty ally to Andy Serkis as a side villain. The breakout star of the film is Okoye played by Danai Gurira who happens to badass warrior standing up for the King and Wakanda.

The script, co-written by director Ryan Coogler and Joe Robert Cole, is a dramatist who makes this mythical superhero come to life. Ryan Coogler has managed to assemble his own set of crackerjack Avengers aka actors who give texture to every character.

On the whole, BLACK PANTHER is in some ways a world of fantasy but also seems to be a very real world. It blends dynasty drama with global politics very maturely. After 52 years since its first mention in comic books, BLACK PANTHER rises high on being bold, vital and brings a welcome refreshment to Marvel Cinematic Universe. As the story continues, Black Panther will be seen in the upcoming Avengers: Infinity War. And of course, lastly but definitely not the least, WAKANDA FOREVER!