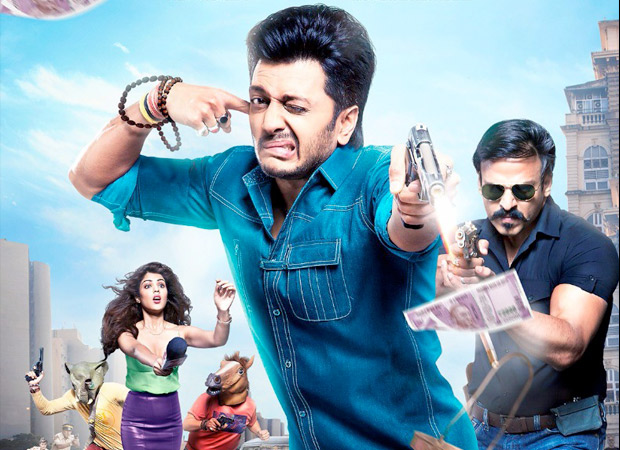 One expects a zany score in Bank Chor given the kind of genre that the film belongs to. With a couple of songs from the film already out, you pretty much have an idea around the kind of score that is in the offering.

It is an uncharacteristic start for the album, what with Kailash Kher stepping in as the composer-lyricist-singer for the title song 'Hum Hain Bank Chor'. Of course, as is known by now, the song has a naughty tone to it, what with the title 'Bank Chor' rhyming with a Hindi expletive. It is pretty apparent that the team is having a lot of fun rendering this one and once Ambili joins in for the rap portion, it completes the loop.

The fun element continues with Rochak Kohli sung and composed 'Tashreef'. Yet again, the song has a naughty set up to it as the overall set up revolves around the 'tashreef' element, courtesy lyricist Adheesh Verma. While the music video has already been out for the 'Cups Version', half way through the song, you also get an impression that this one would pretty much stay on as a jamming session and that's about it.

Next to arrive is the 'BC Rap Knockout: Mumbai vs Delhi' and one wonders where do the makers actually believe the song would eventually go with a title and content like this. Yet another track that appears to be a jamming in progress with Naezy and Pardhaan singing praises for Mumbai and Delhi. This one has composer Shamir Tandon and lyricist Varun Likhate putting together a rap outing. A decent outing.

There is good energy in the manner composer Rochak Kohli kick-starts the proceedings for 'Jai Baba Bank Chor'. This one is written by newcomer Gautam Govind Sharma and soon enough turns out to be the kind that you want to move on for. Nakash Aziz does try to lift the proceedings but constant hearing of 'Bank Chor' in the album makes one a bit repulsive by the time this song is through.

That said, once Baba Sehgal's name is seen as the composer-lyricist-singer for 'Bae, Baba Aur Bank Chor', you do want to catch what he has to offer. The man was a rage 25 years back and one has to admit that he continues to have the kind of energy that he boasted of ages ago. While the beats are all in there with a foot tapping appeal, somehow, you feel that the lyrics could have been much funnier and catchy.

Last to arrive is the Instrumental track 'Mela: The Bank Chor Theme'. This one is an extended piece by Shrikanth Sriram and Drum The Bass Ltd, and though it starts well there is some level of repetition that sets in which makes it go well past the five minute mark.

The soundtrack of Bank Chor is just about okay and basically makes for a theme score which may not really be present in entirety during the film's narrative.