Ulaganayakan Kamal Haasan has been doing extensive promotions for the forthcoming Vikram. The actor recently visited Dubai for the same and the South superstar received a warm and grand welcome in the city. Furthermore, the action packed trailer was screened on the iconic Dubai structure Burj Khalifa. 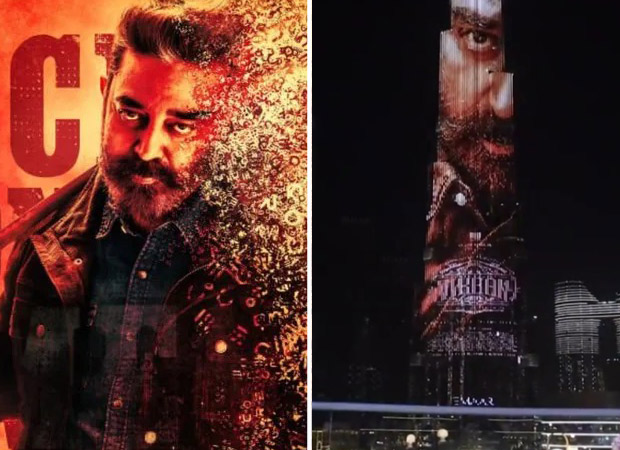 Vikram lights up Burj Khalifa; Kamal Haasan gets emotional as the trailer gets screened on the Dubai structure

Kamal Haasan visited Dubai and interacted with fans during his recent promotional visit for his forthcoming film Vikram. One of the unique strategies opted by the makers of the action thriller was to feature the trailer of the film on the Burj Khalifa. Looking it, we saw Kamal getting rather emotional as he saw all the extensive work put in to the film come to life.

In fact, the director Lokesh Kanagraj had announced about the Dubai promotions on his Twitter handle earlier this week by adding, “Brace yourselves for one of the most extravagant events in the cinematic universe - with none other than UlagaNayagan @ikamalhaasan !  #Vikram trailer to be presented on the world's tallest screen, Burj Khalifa, on 1st June at 8.10pm. Special thanks to @ReelCinemas & Emaar.

Brace yourselves for one of the most extravagant events in the cinematic universe - with none other than UlagaNayagan @ikamalhaasan ! #Vikram trailer to be presented on the world's tallest screen, Burj Khalifa, on 1st June at 8.10pm.
Special thanks to @ReelCinemas & Emaar pic.twitter.com/WW4jTk7eJa

Vikram has been in news for quite some days and the film garnered even more attention after news of Suriya’s cameo started doing the rounds. In fact, a couple of days ago Lokesh Kanagaraj shared photos of the special appearance to be made by Suriya in the film. Needless to say, it has only increased the curiosity about the film.

Kamal Haasan also did extensive promotions of Vikram on Hindi shows like The Kapil Sharma Show. Speaking about the film, while it is the namesake version of the 1986 film, this one is expected to be different and also darker and grittier. The power packed trailer featured a three way war between Kamal and the other lead actors, namely, Vijay Sethupathi and Fahadh Faasil. The film has opted for multi-lingual release on June 4 and will release in Hindi, Malayalam, Tamil, Telugu and Kannada languages.

Also Read: The Kapil Sharma Show: Vikram actor Kamal Haasan will be the guest for the pre-finale episode

Ponniyin Selvan aka PS 1 in Tamil will not…