ZEE5 today announced the premiere of the successful Telugu movie Karthikeya 2. Written and directed by Chandoo Mondeti, this mystery action-adventure saga boasts of an ensemble cast with Nikhil Siddhartha and Anupama Parameswaran in lead roles. The movie will also see Harsha Chemudu, Adithya Menon, and Srinivasa Reddy in prominent roles and legendary actor - Anupam Kher in a cameo. Karthikeya 2 will premiere on the platform on October 5 in Telugu, Tamil & Hindi languages. 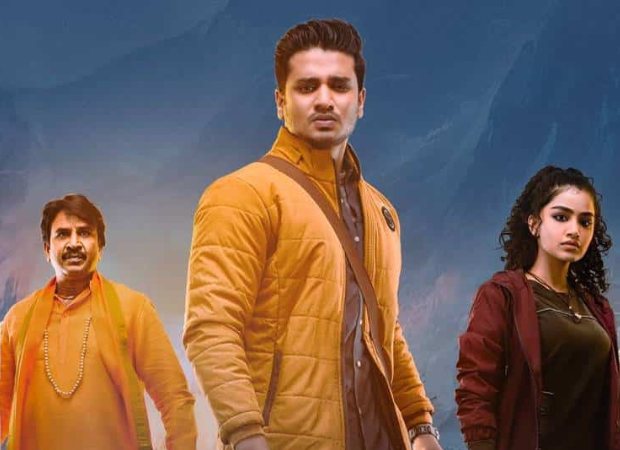 After receiving a great response in the first installment, the makers introduced its sequel which also garnered a phenomenal response from the audience. The movie received an epic response at the box-office and became a blockbuster. Highlighting Hindu mythology, the mystery thriller exhibits the hills of Govardhan, lanes of Dwaraka, the desert of Bundelkhand, and rivers of Himachal Pradesh reflecting India’s splendid diversity. Produced by Abhishek Agarwal Arts and People Media Factory, Karthikeya 2 navigates through protagonist Karthikeya's pursuit of the truth. It leads him to find out the power of the ancient Indian belief system and the Tatva of Lord Sri Krishna.

With Karthik Ghattamneni’s top-notch cinematography and Kaala Bhairava’s music, Karthikeya 2’s mystical universe successfully narrates the story. Premiering on the platform in 3 languages, the film will cater to an audience across 190+ countries and territories. So, brace yourselves for the premiere of this spectacular mystic thriller on 5th October 2022.

Mr. Manish Kalra, Chief Business Officer, ZEE5 India said, “It’s a matter of pride to onboard the highest Telugu grosser Karthikeya 2 on our platform. The film is relatable with strong performances, and high-level animation bundled with an astonishing storyline - a combination of mythology and modern science. At ZEE5, we believe in showcasing content that challenges conventions, and Karthikeya 2 represents that. Telugu is an important market for us and we have been consistent in expanding our presence in this market and will continue to bolster our Telugu content funnel with relatable and quality content.”

Commenting on the film Nikhil Siddhartha expressed, “Being an integral part of a magnum opus franchise like Karthikeya 2 was indeed a pleasure. The film has the right mix of mythology combined with modern science. The story-telling experience is vivid, and I would want a larger set of audience to witness it. This is only possible once it releases on a platform like ZEE5 that caters to 190+ countries. I cannot wait for viewers to experience the opulence and epicness of Karthikeya 2.”

Anupama Parameswaran further added “Getting under the skin of Mugdha was a truly a surreal experience. Discovering clues and trying to unearth hidden truths as members of a secret society was like walking in a museum. I have been a history fanatic all my life. I love reading about codes, symbols, archaeologists, ancient excavations, and more. The story of Karthikeya 2 captivated me so much I had to give a nod. Through the OTT release, I am glad this captivating story reaches many more.”

“After a roaring success at the box office, I was overwhelmed. As a filmmaker, I have always been fascinated by stories of Indian mythology. But my vision is to get the maximum audience to witness this movie and make them aware of our Indian Mythology. With ZEE5 premiering it in 3 languages, we are taking it to every length and breadth of the nation and I am sure the OTT release will be another blockbuster performance.” Director - Chandoo Mondeti concluded.

ALSO READ: Nikhil Siddhartha opens up about the possibility of Karthikeya 3 after the success for Karthikeya 2