After doing brisk business at the box office, Ajay Devgn has moved from De De Pyaar De to his other projects but his film continues to make news. It seems that it has caught the fancy of makers down South who have decided to remake it in Telugu. In fact, they also have an actor on board for the film. Just like Bollywood, this one too will feature a superstar and it is none other than Venkatesh Daggubati. 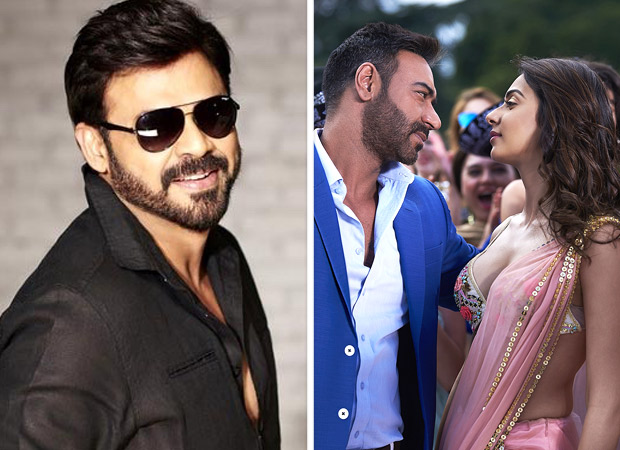 Producer Suresh Babu, who is currently working with Venkatesh Daggubati and Naga Chaitanya for their forthcoming film Venky Mama, recently spoke to the media wherein he spoke about the De De Pyaar De remake. The producer confirmed the developments stating that they have purchased the rights of the Ajay Devgn film. Although they didn’t reveal any further details on the film, it has been asserted that Venkatesh will be the leading man of the film. Interestingly, Rakul Preet Singh who plays Ajay’s love interest in the Bollywood version is also a popular star down South. We wonder if she would be maintained in the remake too.

On the other hand, Suresh Babu announced two more films with his brother Venkatesh Daggubati. The producer confirmed that they are planning two more films with the Tollywood superstar which includes one with filmmaker Tharun Backer and one with Trinadha Rao. Besides that, he also added that they are dedicating quite a bit of time for their ambitious drama Hiranyakashyapa featuring his son Rana Daggubati.

Coming to De De Pyaar De, the film features the love story of an older man and a girl who is half his age. Breaking stereotypes, while this couple decides to settle down, the man decides to make his parents meet his ladylove but is in for a surprise when he realizes that his parents are living with his ex-wife and his children.