After many setbacks, the Shree Narayan Singh directorial Batti Gul Meter Chalu is back on track. While it is a known fact that Shahid Kapoor plays a lawyer in the film, we also know that Yami Gautam too essays a similar role. And now we got a glimpse of Yami in the lawyer avatar sporting the black coat. 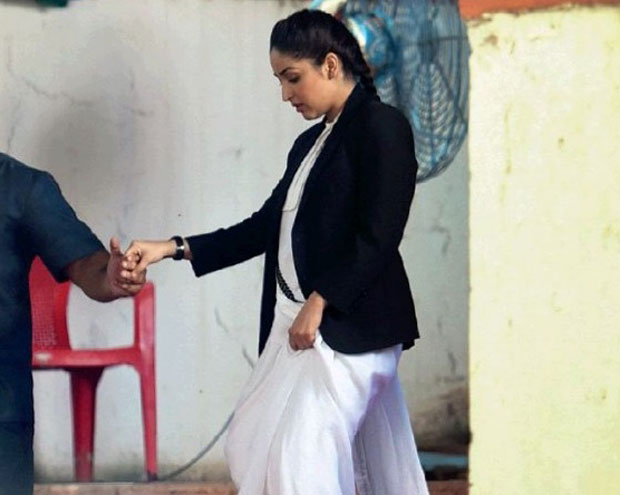 Yami Gautam was snapped on the sets whilst shooting for the film. The actress will be fighting it out in the court alongside Shahid Kapoor. In fact, earlier reports had suggested about how Yami underwent an extensive research before shooting for this film. The actress even attended court sessions at the Mumbai court to understand the body language of a lawyer and get into the skin of her character.

Sources close to the actress said, “She has earlier in June attended the proceedings of a courtroom to prep for her role as a lawyer and is currently shooting in film city in Mumbai. She will wrap up the shoot of the film and then head again to join the shoot for Uri in Serbia.” Interestingly, while Uri features Yami in a short hairdo, Batti Gul Meter Chalu will have her sporting plaits and other hairstyles.

Batti Gul Meter Chalu also stars Shraddha Kapoor as the leading lady. This is the second social drama of Shree Narayan Singh after Toilet – Ek Prem Katha. This movie concentrates on the surging electricity bills that are often manipulated by power companies. The second schedule of the said film faced a slight delay after the team of the film suffered non-payment issues from KriArj Entertainment.  The film eventually went on floor once again after Bhushan Kumar of T-Series decided to take over the project.

The last leg of the film is expected to finish off soon since Batti Gul Meter Chalu is slated to release worldwide on August 31.